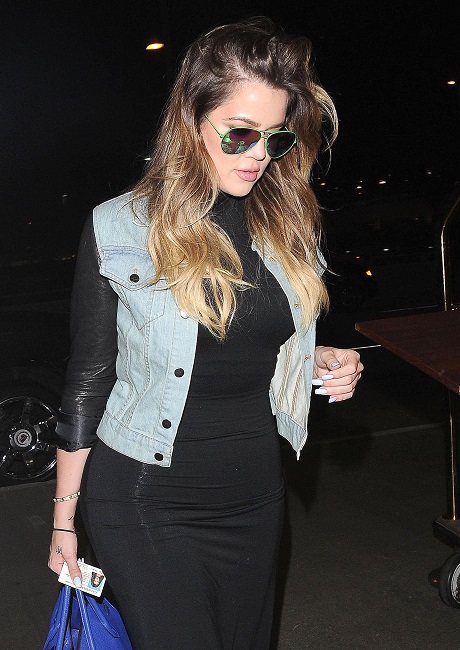 Despite recent reports of a pregnancy, it seems Khloe Kardashian‘s desperate attempts to win a commitment from serial cheater French Montana haven’t gotten her anywhere, and she’s about ready to throw in the towel.

Khloe knows how closely she’s watched by the media. She also knows that anyone who knows her knows she is anxious to start a family. Armed with that information, Khloe set out to set tongues wagging by making it appear that she is pregnant with French’s baby. Khloe had been hearing rumors of her rapper-beau cheating, and a couple women came forward to the media, giving full detailed reports of his alleged attempts to have relations with the women, all during the time he and Khloe have been an item. Since Khloe cannot seem to tame her man using her womanly ways, she pulled the old “pretend to be preggers” game hoping that French would miraculously change and get more serious with his potential baby mama (#2, that is).

It appears now, however, that French has not changed his partying ways, even after hearing all the rumblings that his lady may be carrying his child. Khloe is starting to wake up, realizing he will not change and that if she ends up actually becoming pregnant, she will surely be left alone as he refuses to give up partying and women.

Friends say that Khloe should have known what she was getting into with French, but she did what so many other women have done (several of her sisters, in fact) and was fooled into thinking she could change her man. Kris never liked French. She likes him on camera, but deep down, she is not impressed by his career or the way he treat Khloe and would be very happy if the two broke up. Publically, she has only said that she is worried Khloe rushed into a new relationship too quickly. The truth is, the family never really bonded with French and could really care less if they break up.

The Hollywood Gossip reports that Khloe’s cryptic tweet may be a hint that she’s cutting French out of her life. Khloe has been known to post vague tweets to drop hints about her relationship status. Khloe posted a photo from her Thailand trip with the comment, “Trust no one.” While she may have been putting him on notice that she knows what he’s up to, or trying to let the public know she knows exactly what he’s doing behind her back, she seems to be referring to her recent relationship where trust has been a continual source of contention.

Stay tuned, but don’t be surprised when Khloe quietly walks away from this loser.