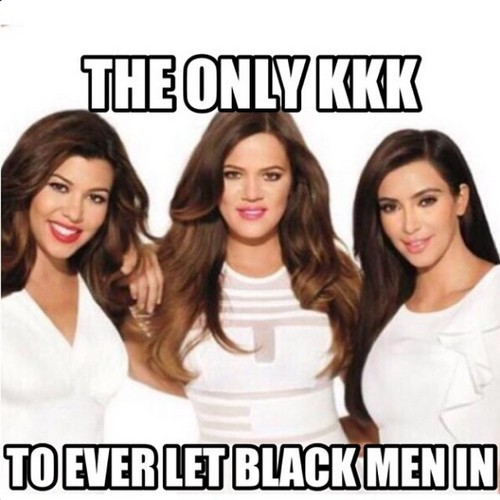 Sometimes Khloe Kardashian just doesn’t know where to draw the line between appropriate and way inappropriate and as a result of her most recent faux pas, she has infuriated fans with what she considered a joke.

It all started with an Instagram post by Khloe including a pic of her and her sisters Kim and Kourtney Kardashian on Tuesday night, reports Radar Online. The picture of the three sisters read “The Only KKK To Ever Let Black Men In,” which was just enough to set off a firestorm of slams by those who saw the tasteless pic on Tuesday night.

Ebony Senior Digital Editor Jamilah Lemieux replied to the post, in which Khloe captioned “True,” with “Wow Khloe Kardashian, you are a trash bag,” and “…I checked her IG, hoping it was a hoax. Now just waiting for the ‘I got hacked’ tweets to start!” She went on, “The Klan killed and terrorized our people. Ironically she was Black girls’ fave one of the group because she’s witty and a size 8. Ugh. Black men the only ones defending her. …”

Other users reacted in disgust as well, calling Khloe on her attempt to be funny using a very sensitive topic that she knows nothing about.

Lemieux has a point—we’ll surely see a reaction from Khloe that somehow defends her crash joke, but likely she’ll say that someone had sent her the pic and she simply commented on it. Will that be enough to save face at this point? Most likely not. Of course Scott Disick, Kourtney’s boyfriend, followed suit and posted the same picture on his Instagram as well. They always stay true to form, don’t they?

Tell us CDLers…are you offended by Khloe’s “joke” or is everyone making a big deal of of something meant to be a harmless joke? Also, if we are talking about the entire Kardashian/Jenner family shouldn’t it be the KKKKKK? Tell us below!