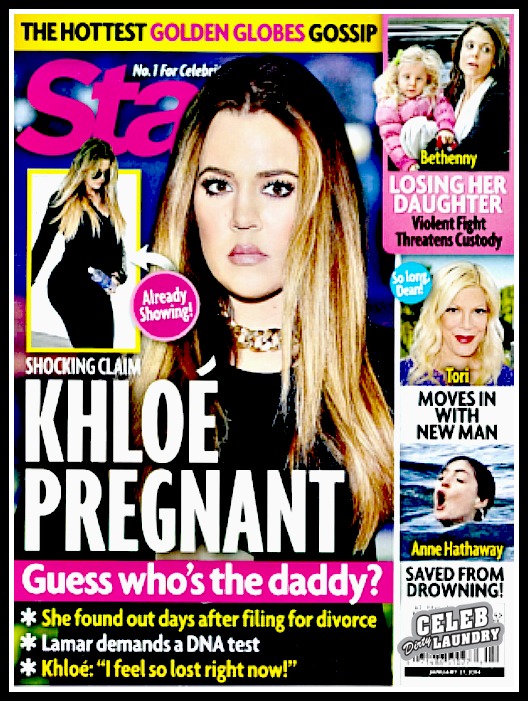 According to the latest cover issue of Star Magazine, Khloe Kardashian is pregnant – and she reportedly found out days after her divorce to Lamar Odom. However, Khloe apparently doesn’t know who the father is, considering she started dating Matt Kemp immediately after she ‘officially’ broke up with Lamar. But then again, we can’t forget the rumored affair with the Game, can we?

Right now, a supposed source tells Star that Khloe and Lamar have been meeting up for sex since their split. The source explains, “Even while their attorneys battle over their marriage dissolution, they’ve felt completely justified burning up the sheets together.”

This story really doesn’t paint Khloe in a flattering light, does it? They’re claiming that she could have been stringing along three men all at once, and that the baby really could belong to any of them. If this report is taken as fact, that means that Khloe is having an affair with the Game, a secret affair with Lamar, and a sort-of relationship with Matt Kemp. Lamar is reportedly demanding a DNA test, which might be the smartest thing to do at this point.

Star also has a feature on Tori Spelling moving in with a new man after her marriage to Dean McDermott went south. Is Tori one of those women who simply can’t live without a man in her life, no matter the reason?

And finally, there’s also a story on how Anne Hathaway was saved from drowning, which Star will no doubt make into a snarky one-off.

What do you guys think about this week’s cover of Star? Do you believe that Khloe’s pregnant, and if you do, who do you think the father is? Let us know your thoughts in the comments.