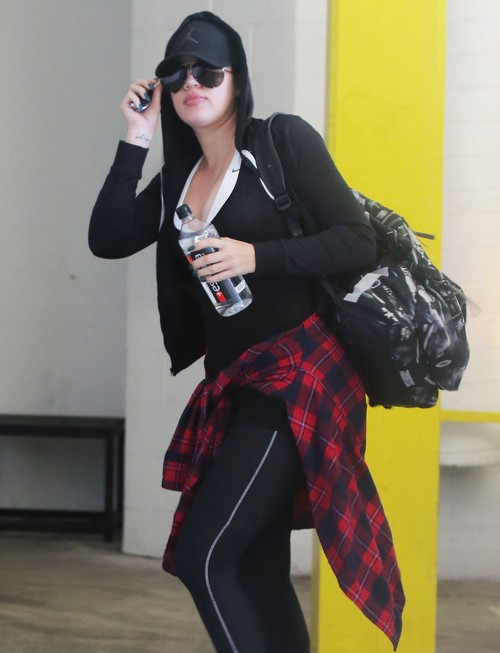 Khloe Kardashian seemed to feel no sympathy towards her very good friend Trina when she began hooking up with French Montana while the two were still a couple. Now, it seems, Kardashian has a little karma coming her way as reports have surfaced claiming her BFF of many years, Malika Haqq, was caught texting with Montana behind her back!

The Keeping Up With the Kardashians starlet was in typical form when she reportedly began going through the rapper’s phone looking for any sign of cheating. Montana hasn’t been able to escape rumors of flirting and infidelity since hooking up with Kardashian, and for good reason. Women have come forward publically to expose Montana by sharing the details of how he made the moves on them, during the same time he was romancing Khloe Kardashian. Determined not to be made a fool of again by a cheating mate, Khloe tried to find the truth by breaking into Montana’s phone.

She never expected, however, to find flirty texts between French and her BFF Malika, but as MediaTakeOut.com reports, she did. In fact, it was reported that the two were having a secret texting relationship behind Khloe’s back. It makes sense that Montana was after Malika as she seems more like his type, physically. Petite Malika looks more like Montana’s ex Trina, than gentle giant, Khloe. And, as we know by his own admission, Montana was perfectly comfortable using the Kardashian brand to publicize himself.

While Khloe blamed Monatana being “needy” for their split (ahem!), the truth is SHE is the needy one when it comes to relationships, while he was simply “in need” of some media, which he got. For now, Khloe may have dumped her ex man, but she’s keeping her BFF around since the texts weren’t too salacious. Kardashian was more upset about the fact that she didn’t know the two were so friendly and texting one another on a regular basis. Could Khloe really blame Malika when she did the same thing to rapper Trina, her former friend? And Trina has apparently NOT gotten over Kardashian’s trashy behavior.

In a new song, Trina is reportedly sending a message to her ex friend and lover in, “F*** Love,” an ode to the former couple who betrayed her, TMZ reports. KDrama Stars shared some of the bitter lyrics written with the Moroccan rapper in mind, “You can keep that purse, you can keep that whip, you can have that b****.” Apparently Montana’s team is siding with Kardashian, slamming Trina for the track. Of course Montana won’t side with Trina…he knows the destruction the Kardashian’s will do to him if he were to ever bad-mouth Khloe, or to support anyone else in doing so. Trina, meanwhile, has publically denied the song was written with Kardashian and Montana in mind, insisting in a tweet, “This record is NOT an attack just speaking on behalf of everyone who is on #F***LOVE getting money and living their life! Rockstarr Ish.”

Well, Trina should know how it is…she reportedly was the other woman who was dating Montana while he was still with ex-wife Deen Kharbouch. Seriously…do any of my CDLers see anything in this guy that would make all these women go to these lengths to be with him? Perhaps there are just too many women with low self-esteem. Ugh.

Tell us what YOU think!! Weight in below, CDLers…we want to hear from you!