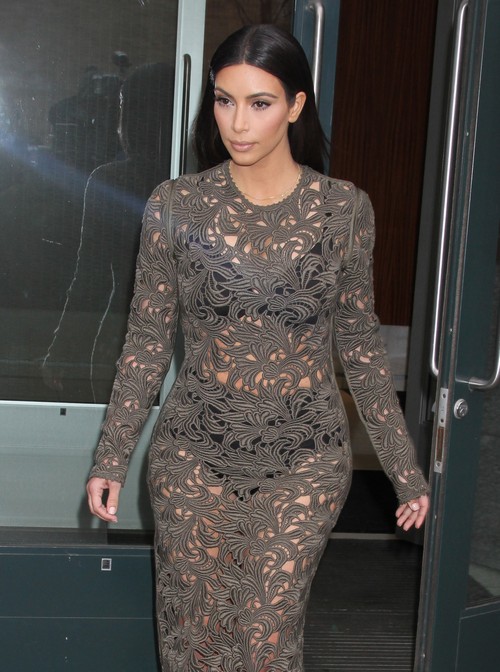 As if Kim Kardasian‘s ego was bloated enough from that Vogue cover, Anna Wintour decides to throw her another bone by having dinner with her. Dinner! Why, Anna, why?

Well, before we go into the business logistics and strategy behind Anna’s reasoning for the cover and having dinner with Kim Kardashian and Kanye West, let’s first take a look at Kim’s hideous outfit. Seriously, Kim’s worn some ugly clothes before, but this has to take the cake. She’s wearing a see-through grey dress with a bra and underwear underneath. Basically, she’s going out in her undergarments, because that dress might as well not exist.

Do you think she realizes that she looks terrible? Or does she not have a say in what she wears, i.e. it’s all Kanye’s choice? Because even Kanye, as stylistically challenged as he is, has to admit that this is a horrendous, horrendous outfit. And considering that they’re out to dinner with Vogue’s editor, you’d think they would have wanted to be more professional, no? Because this isn’t high fashion, and it isn’t even fashion. It barely counts as clothing, and it’s a slap in the face to actual celebrities who’ve been wanting a Vogue cover for as long as they can remember [ahem, Victoria Beckham].

It’s actually really sad, though. See, Victoria’s been wanting a Vogue cover for almost a decade now, and she hasn’t gotten one. And Anna decides to give it to Kim instead? This is what she’s broadcasting to the world: Kim Kardashian is better than all of you. And then she’s rubbing salt into the wound by having dinner with her.

I mean, you’re telling me Kim was a better choice than Victoria Beckham? Or Lupita Nyong’o who just won a freaking Oscar? Or Shailene Woodley, who had a major release coming out this month? Or Scarlett Johansson, who has two movies coming out this month? This is the world we live in now, where a reality star who got famous off a sex tape is more worthy of a Vogue cover than all the aforementioned names?

Really, the blame lies with Anna, and Anna alone. Kim’s wanted a Vogue cover for a very long time, and somehow, Kanye West strong-armed Anna into giving her one. Let’s just hope that whatever insanity has overtaken Anna stops soon, and she comes back to her senses.