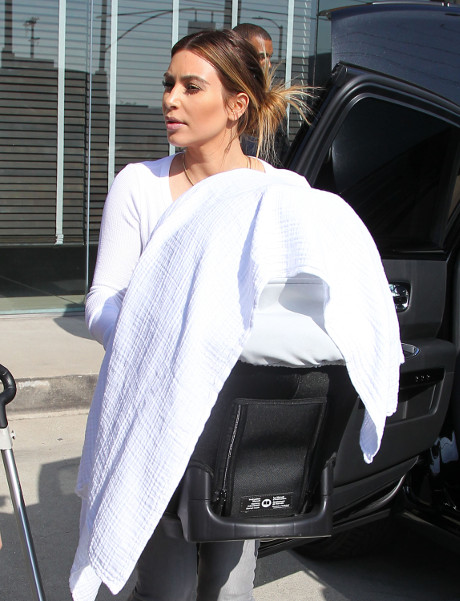 Kim Kardashian wants you to know something. She will not come right out and say it, so she’ll do what she does best . . . . She’ll send a duck-faced selfie with some vague passive-aggressive comment and play dumb. Well, I guess she’s not really “playing” dumb. One thing is obvious: she wants everyone to know that she was the one who lightened her hair first. I know what you are thinking, and you are correct. It is JUST like high school. Kim is the self-absorbed popular girl who needs to let everyone know that SHE lightened up first. The only difference here is that her rival, the one who she was indirectly calling out, is none other than so-called friend Beyonce!

It is killing Kim that Beyonce lightened her hair shortly after Kim. Beyonce is known as a trendsetter and Kim doesn’t want her stealing any of her thunder. She doesn’t have the backbone or common sense to just say that. Perhaps we might even find a way to have just an ounce of respect for her had she just been real about it. Instead, in true Kim fashion, she cries on twitter about her hair to make it known that she started the trend. Then, of course, follows with a plug for KUWTK. Kim tweeted, “I’m so annoyed I dyed my hair dark! I wanted to switch it up since I feel everyone went light, and we started filming a new season of Keeping Up With the Kardashian [sic], so wanted a fresh look. BUT now I am missing my light hair! HELP!!! What do I do? Go light again or stay dark and get used to it?”

So let’s see here. She insulted every celebrity who lightened their hair recently by making the assumption it was as a result of her own hair color change. Then, she plugs her show. Lastly, she says she wants to go BACK to blonde but actually asks her fans for advice. Don’t bother KK followers, because she doesn’t truly want to know. Her intention was to burn Beyonce, plug her show, let you all know that she was the first to go light, and NOW she can go back to the blonde color she wanted, all while putting it out there that she was the original. If she’d have stayed blonde (gasp!), her followers may not have realized she led the way for this hair color frenzy sweeping the United States (yes…complete sarcasm).

This, however, was her passive-aggressive way at getting under Beyonce’s skin. Until Kim hooked up with Kanye, Kim and fashion were like oil and water. Beyonce’s following is huge and her fans want to emulate her look and style. Kim is intent on showing Beyonce up after getting dissed by Bey when she declined an invitation to be in Kim’s wedding. Bey also made Kim look bad because she didn’t embrace her attempts at becoming (or just appearing to be) besties.

Since Kanye has been introducing Kim to high fashion, she now considers herself to be a big player in the fashion world, a true trendsetter. Kanye keeps filling her head with these wild dreams that she’s taking the fashion world by storm, but it is simply his way of giving her an ego boost (seriously, does she really need one?) and making her happy. She knew that tweeting about her “agony” over her hair color would accomplish all the things she wanted to say — in her typical, indirect way.

After a stressful, traumatic day of worry and anguish over her chosen hair color, at least she doesn’t have to worry about a Twitter feud with Beyonce. Surely Beyonce could care less, just like the rest of us.