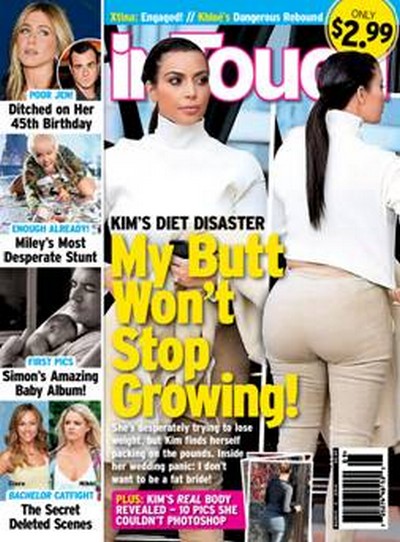 According to the latest cover issue of In Touch Weekly, Kim Kardashian has become so worried about the increasing size of her butt that she’s hired a full-time tailor.

A source tells In Touch, “Kim spends hours getting ready and selecting her outfits. She gets her clothes tailored especially to accommodate her butt. It’s all just so over-the-top — she takes hours just to pick an outfit to go to lunch. She’d rather squeeze into something and say she’s a size smaller than be comfortable.”

Yeah, we know that already. Anyone remember those horrifying shoes that Kim tried to squeeze herself into while she was pregnant? I think I actually had nightmares from those images. And her fashion sense seems directly derived from the most expensive things that designers will let her wear, so it’s not so much about the quality as it is the quantity. Plus, I think Kim’s always had a complex about her curves, and she wishes she was a lot skinnier than she actually is. Unfortunately for her, wearing pants and dresses 3 sizes too small doesn’t do wonders for anybody, much less someone as curvy as Kim. She’d be a lot happier if she stopped trying to make herself into a mannequin and just embraced her body shape.

In Touch, like other tabloids, also has a story on Jennifer Aniston‘s 45th birthday, and how she was supposedly ‘ditched‘ by fiance Justin Theroux during her special day. Maybe he had a prior commitment? Considering that their relationship is built on mutual benefits, I don’t think Justin would have missed Jennifer’s birthday without clearing it with her first.