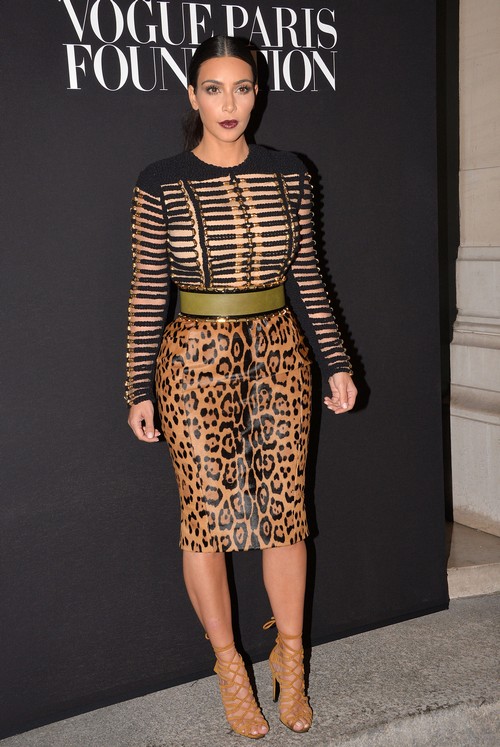 It is being reported that Kim Kardashian is “married and miserable” and now becoming “increasingly unrecognizable to those around her.” An unidentified source close to the curvy Keeping Up With the Kardashians star told Radar Online that Kim has “morphed into a completely different person” since marrying Kanye West, going on to state that “those around her are concerned.” There is little doubt that this is probably true.

One need not look farther than Kardashian’s shoes for proof that she has changed for the worse. Perhaps you haven’t noticed, but Kim has been wearing the same golden strappy sandals for quite some time now. She wears them almost every day and often pairs them with questionable pieces, such as dark gray jeans in an aesthetically clashing manner. Heck, Kim even commented on the fact she wears the shoes all the time on her celebuzz page; “And yesssss, I wear these heels all the time because they blend in with my skin color so well and look nude.” Now, to her defense, the shoes actually looked smart in the picture she captioned with this statement. Yet, the implication was pretty clear; this is not the Kim Kardashian we know speaking, this is Kanye West’s wife speaking.

None of us can forget when her then husband to be made her throw out her entire wardrobe on an episode of her annoying reality show. Some have applauded her transformation. However, it is clear that Kanye is controlling her so much that she is loosing who she is as an individual. Kim’s life has been chronicled on television for a while now and we all know she was never the type to wear the same pair of shoes more than once, let alone every day for an extended period of time. That statement about the shoes matching her skin color didn’t come from nobody but Kanye. It isn’t even clear why he would want her to wear the same shoes, but it has been clear that Kanye moves to the beat of a drum only he can hear for a long time now.

The writing has been on the walls for all of us to see. Kim is not happy. She can’t be happy if she can’t even be herself. If you think the shoe argument is far fetched, then how about all the recent sightings of Kim hanging out with her sister Kourtney and her kids. You think Kim doesn’t want to parade her newest accessory, the adorable North West, around for all of the world to see? Of course she wants to chronicle her new life as a mom. It would be critical to the success of her family’s various reality show ventures if she did. Kanye has made it clear he doesn’t want North on camera like that. Whatever Kanye says, Kim does. Because of this, little North has been coined with the nickname “Ignori” since she can never be with her mom who has filming obligations. Certainly this has not helped the dismal Kardashian tv ratings as of late either.

The source was reported as also stating Kim was a much happier person with Reggie Bush, and that following his publicized wedding she is feeling more depressed than ever. “She has become hyper-critical of her appearance, and making sure everything is perfect for Kanye 24/7. Whereas Reggie was completely laid back and easy-going, Kanye is intense, and very hard to please.” It sounds like Kim is realizing what she has signed up for by marrying Kanye and what she has lost in return, the freedom to live a happy life. It may be time to start taking bets on how much longer these two will remain married, but I could be wrong. Help me wash it out by posting your thoughts in the comments section below.