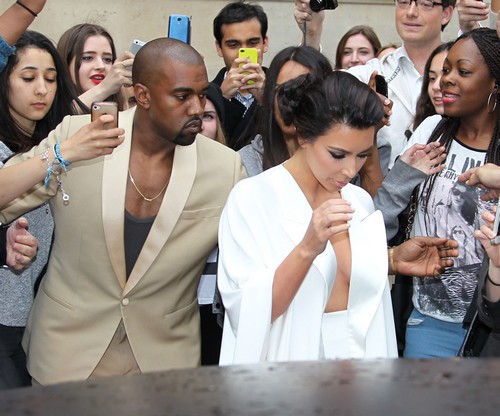 We already know that Kim Kardashian is delusional about her fame and her place in the celebrity hierarchy, a delusion perpetuated by the likes of Anna Wintour and other A-list fashion designers. She probably assumes that just because she landed the cover of Vogue Magazine[albeit with Kanye West], she’s somehow considered important now.

Sadly, to the media, Kim is important. The Kardashian name still holds a lot of value, and they’ve somehow managed to capitalize on their fame at just the right moment. Kim is even considered a big deal abroad, which means that there’ll be blanket coverage concerning her wedding in Europe. But according to sources, Kim is hoping that one specific guest attends more than anyone else – and no, it’s not her fiance.

Apparently, Kim invited Kate Middleton to the wedding, hoping against hope that the Duchess would make time for her nuptials. See: Delusional.

If Kate couldn’t even make time for a charity dinner hosted by Ralph Lauren, how on earth would Kim think that there was even the slightest chance of Kate attending her wedding? Putting aside all the possible pregnancy rumors concerning Kate, the woman has some standards. She’s the freaking Duchess, for crying out loud. She has a young son to take care of at home, and even if she could, I doubt she would want to leave the bundle of adorable that is Prince George to attend a wedding for someone who she doesn’t even know. Say what you will about Kate, but she’s not a famewhore. When she doesn’t need to make public appearances, she disappears from the public eye and becomes a hermit. Sure, a large part of that has to do with laziness, but still – there’s no way in hell she’s attending Kim’s wedding.

Of course, that doesn’t stop the delusion from spewing out of Kim’s head. I don’t know if any of you will recall, but Kim actually sent Kate some free samples of her ‘fashion line’, a.k.a. the disastrous mess that Kim tried passing off as clothing. Of course Kate completely ignored both her and her clothes, but Kim doesn’t give up that easily. If she did, she never would be getting married to Kanye West in a multi-million dollar wedding in Europe. See, persistence and delusion pays off sometimes.

Soon to be married couple Kim Kardashian and Kanye West are bombarded by fans while leaving Paris, France for Versailles, where they host their wedding reception