Kim Kardashian Tweets Excitement Regarding Vogue Cover – She’s Happier Than She Was The Day She Birthed North West! 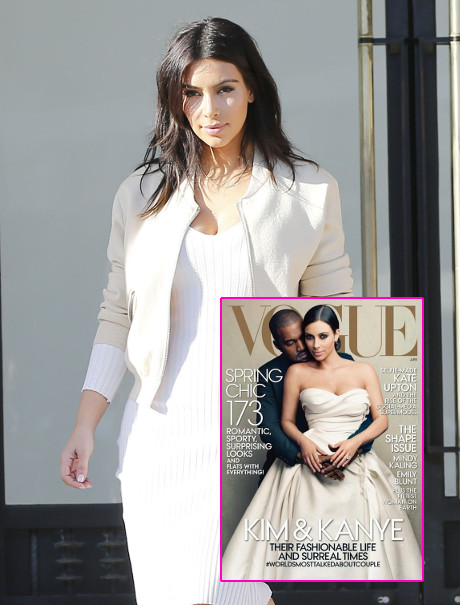 Kim Kardashian and Kanye West have proven that black magic is real because he and Kim are on the cover of Vogue. Kanye has been stomping his little feet like a child in the candy section of the supermarket for some time now and, like a beleaguered mother, Anna Wintour acquiesced to his demands that his talentless, good-for-nothing fiancée be featured on the cover. Kim, never missing an opportunity to brag about assaulting the public with her face and private parts, took to twitter to tweet her excitement.

“This is such a dream come true!!! Thank you @VogueMagazine for this cover! O M GGGGGG!!! I can’t even breath!” she said. I don’t remember her being this excited when she had North. Speaking of North, it appears they’re gonna drag her out for this photo op. This family is living proof that God takes care of fools and babies.

Here’s the thing, if these two were in any way interesting I’d say more power to them. If this magazine sought Kimye out for their contributions to fashion, that would be one thing. But they practically begged to have the cover and only a narcissist can view that as a win. Besides, what can they possibly have to say that would be of note? Furthermore, what could they have to say that hasn’t already been said? They live in a fish bowl and they are doing so of their own volition.

There is no mystery about them whatsoever, so I doubt the article will be a page turner. Kanye may fancy himself a fashion icon/mogul but Kim does nothing but don whatever horrendous ensemble Kanye sets out for her in the morning. If that’s all it takes, then they may as well put a mall mannequin on the cover. At least the mannequin would have a better personality.

I blame Kris Jenner for this. A social climber with a direct line to Satan is indeed a formidable foe. Any day now, there will be open ice skating in hell because Kanye is relentless and Kim will have the star on the walk of fame…or else. Jay Z and Beyoncé better watch out and never leave any unopened beverages around Kris; I’m sure she has a potion for winning over self righteous snobs and those two are at the top of the list. Before they know it, little Blue Ivy will be a flower girl on a very special episode of Keeping Up With The Kardashians and they’ll be scratching heir heads wondering how it happened. What do you guys think? Has Kim arrived or is she still just a reality star who got her start from a sex tape?