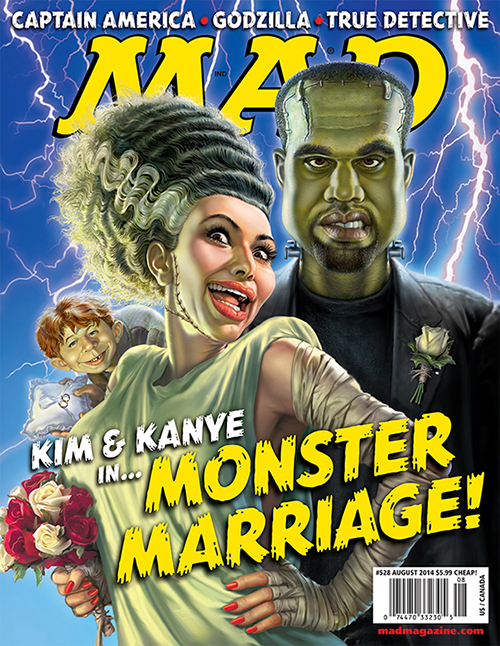 Kim Kardashian and Kanye West‘s marriage extravaganza has finally concluded — but that doesn’t mean we’re done hearing about all the amazing frivolities that transpired over the course of their week-long celebration. So be prepared, CDLers, for more news discussing the aftermath of this royal celebrity wedding. Or, as MAD Magazine‘s upcoming issue suggests, one super classy “Monster Marriage.” The hilarious magazine, known for it’s quirky illustrations, takes your favorite reality star and most outspoken rapper and gives them one of the best monster makeovers you’ve ever seen.

On the cover of the June 17th edition of MAD Magazine, Kanye West has been caricatured into Frankenstein’s Monster and Kim Kardashian channels her inner ghoulish, monster bride — complete with janky sutures and all! And Kim wants us to think that she hasn’t had any work done . . . . Well, here’s proof she’s gone under the knife! You saw it here first, folks!

This issue of the magazine also contains a humorous article entitled “Celebrity Acronyms,” which features some of your favorite celebrities — including Justin Bieber, Rihanna, Kanye, Kristen Stewart, and more — alongside their acronymized titles. So take a look at the article below, written by Matt Lassen and illustrated by Rick Tulka, and be sure to tell us which celeb acronym is your favorite!

S.W.I.F.T. (Singer Writes Intimate, Forgettable Tunes): However, I disagree with this because I still can’t get that freakin’ “We Are Never Ever Getting Back Together” out of my mind. So, please, MAD staff, send me the magic potion that makes you immune to T-Swift’s seductive, brainwashing ways!

R.I.H.A.N.N.A. (Risque Island Hottie Attracts Narcissistic Nutcase A-hole): Fantastic. That is all. All I can say is this needs to be on not just one T-shirt but several T-shirts. In many different colors. And then worn all over the universe. Or perhaps in several different universes. 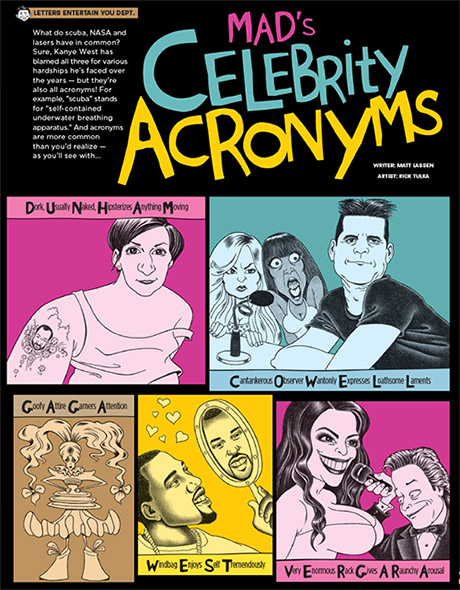 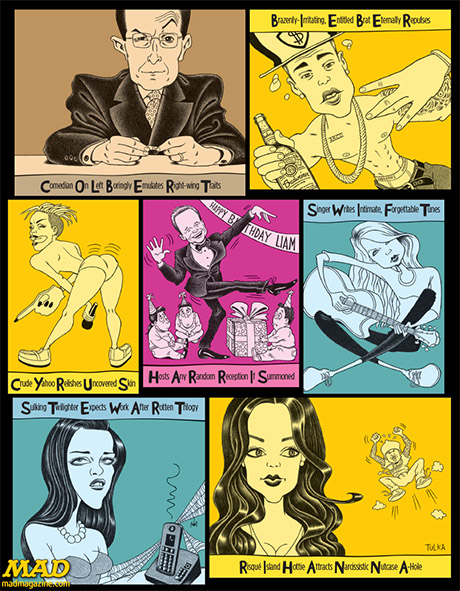