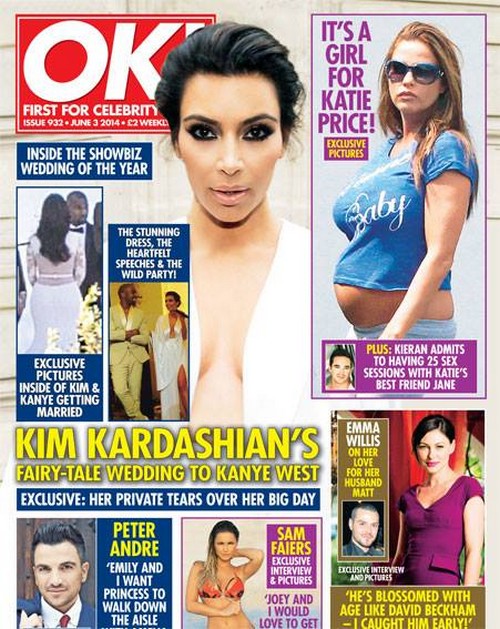 Several tabloids are calling Kim Kardashian‘s wedding to Kanye West the ‘showbiz wedding of the year‘, which is just hilarious. I realize they’re trying to sell their magazine, but they should be trying to hold on to at least a little bit of their integrity, no? Because if Kim’s wedding is the biggest wedding this year, then what are we going to call Angelina Jolie‘s and Brad Pitt‘s impending nuptials? Or even a lesser Hollywood couple? Like I said, Kim and Kanye need a big, fat helping of reality, but they’re never going to get it if these tabloids keep kissing their asses.

OK! Magazine [the UK version] has just released an exclusive on Kim’s wedding, complete with details from her wedding, including her wedding gown and the ‘beautiful’ speeches that took place during it. Plus, there’s tons of pictures of Kim’s Givenchy wedding dress, which is a monstrosity in its own right. With the right tailoring, it might have been an attractive dress, but it just ended up looking like Kim was trying to play dress-up as a mermaid – and failing miserably. 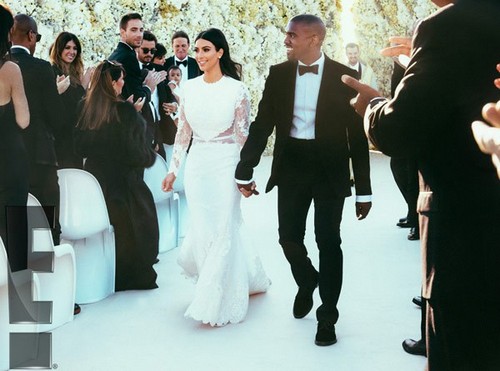 Unfortunately, and as much as I hate to admit it, the flower wall behind Kim and Kanye during their ceremony was gorgeous. In fact, the setting of their wedding was the best part – and honestly, the Forte di Belvedere was probably a much better location to get away with all their excess, especially since the Versailles wouldn’t have allowed so much modification.

Plus, there’s also Kanye’s infamous wedding speech, full of delusion, hilarity, and his gems of wisdom. Kris Jenner and Bruce Jenner also gave speeches, and Bruce’s was the only one that seemed even slightly emotional – and I have a feeling it was because his face was hurting from all the plastic surgery, not because he felt anything at seeing Kim and Kanye get married.

Overall, the dresses [and the fact that Kim changed after the ceremony], the 7-tiered wedding cake, the multiple course meal, the flower walls, the cameras – everything was a practice in excess, and if Kim gets married again, I don’t know how she’ll top the sheer famewhore factor of this one. 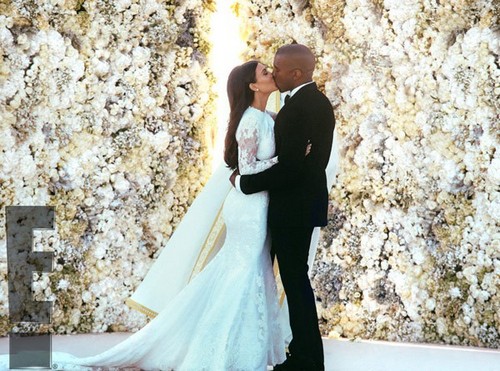