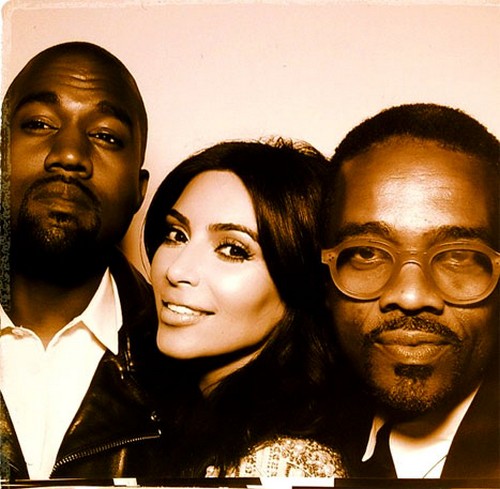 Just when it looked like every moment of Kim Kardashian’s wedding weekend to Kanye West was clearly planned by anyone but her a normal new tradition found its’ way in the back door. I have to think that even Kim wasn’t allowed to order a photo booth for her wedding reception. My guess is that Kris Jenner knew that it would be fun for guests and it would also produce tons of kinda sorta random pics for Instagram! I wouldn’t be surprised if all of those phones handed out to guests already came with an Instagram app already downloaded!

Anyway, of course there is a shot of Kim and Kanye looking like they are taking themselves way too seriously. I know Kim isn’t the brightest bulb but after three weddings she does know that it’s supposed to be a happy occasion and a smile wouldn’t kill her, right? If you’re looking for a shot of a blissful looking couple then John Legend and Chrissy Teigen at least give us that. Kendall and Kylie Jenner also had some fun in the booth as did Kris and Jaden Smith.

Speaking of photos, Khloe Kardashian posted one of herself this morning looking bootylicious. This pic has already generated more buzz then the photo booth shot of the new Mr. and Mrs. From the tiny glimpse that we are being given it looks like Kim and Kanye’s guests had a good time. So far only one negative story has crept out of Europe, that being Rob Kardashian flying back to L.A. Before his sister even swapped vows. Rob has been battling his weight and rumored addiction issues and sources say that Kim laid into him because he hadn’t lost weight for her big day. It didn’t take much to send the seemingly fragile Rob running for the airport.

Here’s the real question, how long will it be before Kanye becomes Kim’s third ex-husband? Tell us your thoughts in the comments below!