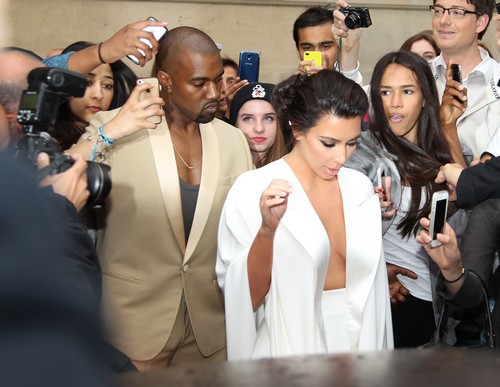 Whether it was the fact that A-list couple Beyonce and Jay-Z wouldn’t dare attend the wedding of a reality star (especially a reality star that they aren’t too find of), or the fact that they didn’t feel like celebrating the union of two as they marry because of their own marriage woes, Beyonce and Jay-Z officially ditched the wedding of Kim Kardashian and Kanye West this weekend. The pre-wedding activities were in France, while the ceremony takes place in Italy. Apparently, Kimye has taken over both Italy and France this weekend, so perhaps an apology from the US is in order.

As CDL has been saying for months, Beyonce would not take part in the wedding and she remained true to her word. Beyonce tolerates Kanye, but she cannot stand Kim and didn’t want to be a part of the celebration as it may lead some to believe she is a friend of the ample-bottomed porn-turned-reality star. If her disdain for Kim wasn’t enough to keep her away, the rumbles about the deterioration of her marriage may have sealed the deal. Beyonce and Jay-Z are trying to lay low right now after the negative media attention they’ve gotten over the now-famous elevator fight between Bey’s sister Solange and Jay-Z.

Many sources have speculated that Rachel Roy has been a source of contention between Jay-Z and Beyonce for years after it was reported the two had a fling. Solange had an exchange with Roy at a Met Gala party that later provided the ammo for a serious beat down on Jay-Z by Bey’s protective sister, Solange. Apparently, Roy is said to be a guest of the Kimye circus, er, wedding.

Though Jay-Z originally planned to attend the nuptial of good friend Kanye, he didn’t dare go without Beyonce now as he’d be in far too vulnerable a position after what has happened as a result of a fling with Roy. The duo instead decided to enjoy the Memorial Day weekend in the Hamptons, far away from Kimye, Roy, and the obvious media frenzy that will be ever present throughout the celebration. Wouldn’t it be great if we found out that Vogue’s Anna Wintour, who declined the wedding invitation due to a family obligation, was partying it up with Bey and Jay in the Hamptons?! We think so!

Tell us what you think about the wedding no-shows in the comments below!