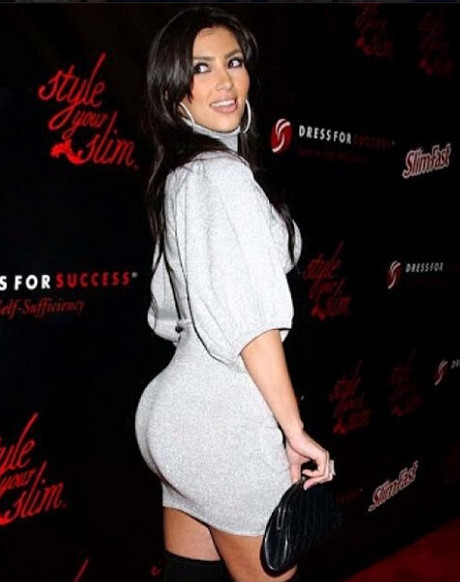 Kim Kardashian, in her endless battle to defend her butt’s “naturalness” to the world, posted a photo on Instagram alongside the label “FlashBACK Friday lol.” Kim’s photo comes after several media outlets bashed the reality TV star’s rear, which seems to be much bigger now than it was a few years back — to which Kim says, Duh. She responded to those claims, writing, “I’m seeing all these nonsense tabloids claiming I have butt implants-injections,” she wrote. “Get a life! Using pics of me 15lbs skinnier (before I had my baby) comparing to me now! I still have weight to lose.”

Whether you believe Kim Kardashian’s cheeks are surgically enhanced or not is entirely up to you, but there’s no denying the fact that she’s had other forms of plastic surgery — so who’s to say she hasn’t taken the leap to get her backside a bit, um, back-ier? Fill up those cheeks, doc!

Kim continued her defense yesterday on Twitter: “Anyone who has had a baby knows how hard it is to lose weight(especially the last bit of weight) & your body totally changes! Making fun of me pregnant & making fun of me trying to lose weight now shame on you. I’m not perfect but I will never conform to your skinny standards sorry! Not me. And BTW I’ve lost a lot so far & I’m proud of that! Don’t give young girls a complex!”

In case you missed some of the tabloid stories regarding the infamous Kimmy bootie, here are a couple things the gossip rags wrote about ‘dem cheeks: National Enquirer claimed the voluptuous nature of Kim’s butt is due to surgical enhancements, mainly injections, and In Touch published a headline reading “[Kardashian’s] butt won’t stop growing!”

Do you think Kim Kardashian’s butt is being modified or do you think its “fuller” nature is merely due to baby weight that she’s in the process of shedding? Leave your thoughts in the comments section below. Also let us know what you think about tabloids criticizing celebs’ bodies, regardless of whether or not they’ve had plastic surgery: Is it right, wrong, or just something that comes with the territory of being a public figure?