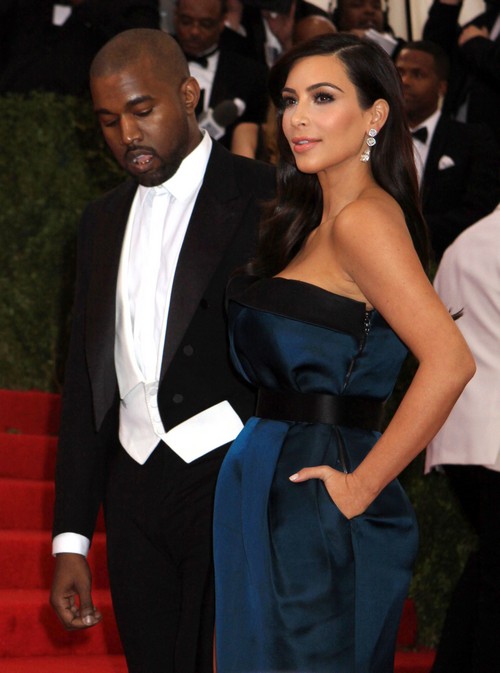 The Kardashians all have a sixth sense about fame, and so it makes sense that Kim Kardashian can pretty much feel her time in the spotlight slipping away. Kris Jenner has replaced her with Kendall Jenner and Kylie Jenner, and Kim’s only claim to fame is now her relationship to Kanye West and their upcoming wedding. But knowing Kim’s penchant for famewhoring, it’s possible that she’s also cooking up some other ways to stay relevant in the media – say, for example, getting pregnant again, or at least, pretending that she’s pregnant again?

Kim attended the Met Gala last night [because Anna Wintour has completely lost her mind], and she posed for a picture with Balmain’s creative director, Olivier Rousteing. The picture wasn’t particularly out of the ordinary, except for one fact: Olivier was belly cupping Kim. Belly cupping is one of the most annoying trends in pictures, especially with celebrities – but it’s even more annoying when a famewhore like Kim indulges in it. She KNOWS that people are watching her every move, so she instagrams and tweets pictures like this because she knows it’ll get people talking. Forget spending time with her existing child or getting in quality family time – nope, she just wants people to think she’s pregnant again.

The picture also hints at Kim being pregnant with baby #2, thanks to a tiny baby bump under her dress. Granted, that could also be a result of the baby cupping, but does anyone put it past Kim to create that baby bump herself with some extra tissue or toilet paper or something?

To be honest, I was expecting Kim to pull some sort of publicity stunt sooner or later. Kendall, Kylie, and Khloe Kardashian have all been surpassing Kim in garnering spotlight for the past year, and Kim’s place as the most famous Kardashian sister is sliding past her. Nobody really cares about her anymore, and even her wedding is barely gathering any interest, even though it’s just weeks away from the big shindig. Kim probably thinks that if she can get people talking about her pregnancy, she’ll get people interested in her again. Well, I don’t know how to say this, but I think that ship has sailed – far, far away.

I mean, Kim hated being pregnant. She hated being mocked by the media and by her ‘fans’, and the only reason I can think of for putting herself through that ordeal again is the attention that she got during her pregnancy. It wasn’t positive attention, but it was still attention. For Kim, even negative publicity is better than zero publicity. Plus, if it’s the only way Kanye will stay with her, you can bet that she’ll do anything to please him. Right now, Kanye’s the biggest reason that she hasn’t yet drifted into obscurity, and she’ll get pregnant with his baby twenty times more if it means that she gets to stay famous.