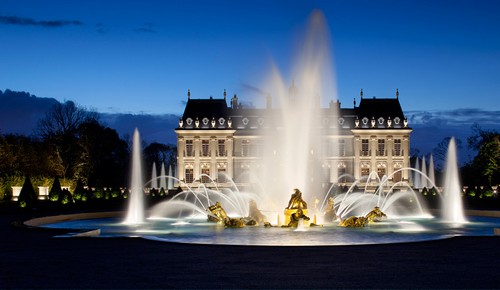 Of course Kim Kardashian needs a month to plan her wedding. Who knows what kind of over-the-top monstrosities she’s planning on cooking up for her third big day, but with the Kardashians, nothing’s ever subtle.

According to reports, Kim is planning on heading to France and living there for one whole month before the wedding. Sources explain to Hollywood Life, “Kim wants to make sure everything goes accordingly. Several friends are going out with her a month early to help her with the wedding. It will all be filmed.”

Friends… but not her daughter, North West? Over the past year, Kim’s treated North more like a prop than her daughter, trotting her out for strategic photo ops and Instagram videos. But if you think about it, Kim and Kanye [West] do seem to travel a LOT without North. In fact, I’m guessing the baby’s probably a lot more familiar with her nanny and extended family members than she is with her own mother and father.

So sure, I get that Kim is heading to France one month early to plan her wedding. We wouldn’t expect anything else from her, would we? And of course it will be filmed, since this whole wedding deal will be a huge ratings hit for E!, as much as I hate to admit it. However, the fact that she won’t be taking North with her says a lot about how she views her own daughter – as a crutch and an inconvenience. She doesn’t want to take North to France because she wants to spend the entire time hobnobbing with the French elite, and cooking up bigger and better ways to stay in the spotlight. She can’t have North there, ruining her ‘Me! Me! Me!’ moments, can she?