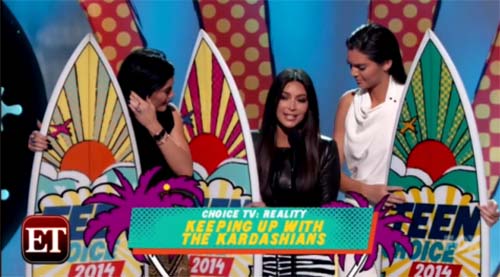 Kim Kardashian, Kylie Jenner, and Kendall Jenner made an appearance on the Blue Carpet of the Teen Choice Awards last night. In addition to accepting an award later in the show alongside her sisters, Kim gave a rather lengthy interview to Entertainment Tonight, which included her going off about how she fears the day when her daughter, North West, leaps into the world of social media.

On the subject of social media, particularly how it can be used as a medium for cyberbullying and vehicle for hate, Kim says, “I always say I feel really bad for my little sisters. I would really hate for the day when my daughter has to get on social media, because the comments [can be] like cyber bullying. Sometimes they can be so negative.”

However, just because Kim and her family are subjected to the inevitable hate being spread across their channels, that doesn’t mean they don’t receive any glory. In fact, they receive plenty of glory from their closest fans — those willing to shower them with praise. Kim admits that she’ll often turn to her fans for support — and it’s the support of these devoted individuals who help fuel her ego.

“I was needing some motivation from the Twittersphere, to help me work out a little bit harder and to get back onto my no carbs/Atkins [diet]. I fell off a little bit. I just gotta get focused and get back on.”

[Sidenote: Kim will soon be releasing a photo book composed ENTIRELY of selfies. Yes, now you can have a giant book filled with selfies of Kim Kardashian. Your coffee table, and your guests, will thank you.]

Take a look at the interview below and let us know what you think about Kim Kardashian’s statements. Is she right on the money? Should she worry about the day when North West dives, head first, into the realms of social media? It’ll still be many years until North West pops up on Instagram (or whatever the newest social craze is), but it’ll be here before we know it . . . . SO WATCH OUT, WORLD!

Pregnant reality star Kourtney Kardashian and her sister Kim Kardashian are spotted visiting their pop-up ‘DASH’ store on August 12, 2014 in Southampton, New York. The Kardashian clan is currently in New York filming scenes for “Kourtney And Khloe Take The Hamptons.”