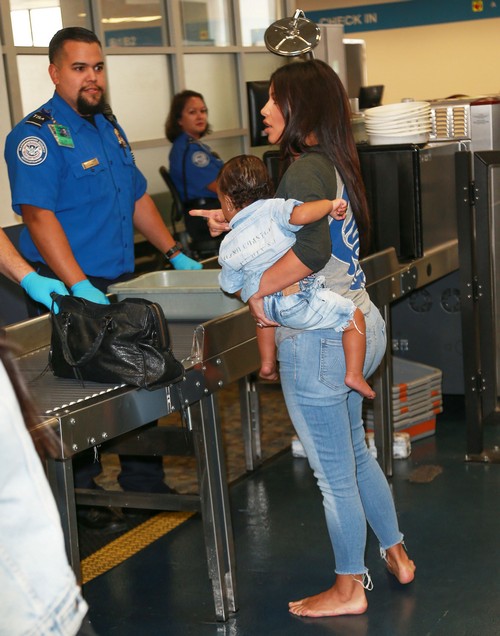 Kim Kardashian may whine endlessly about her pregnant figure and her weight gain, but we’ve been saying for months now that if Kanye West wants her to get pregnant again, she would do it at the drop of a hat. And now, Kim has admitted that she and Kanye are ‘trying’ for their second child, and honestly, Kim’s recent weight gain suggests that they may have already succeeded with their attempts.

Kim mentioned in an interview, “[Kourtney Kardashian] is like more than half way in, so you know, we’re trying. There’s a lot of craziness in the house, so why not add pregnancy hormones to the craziness?”

She’s clearly referring to the fact that both she and Kourtney would be pregnant at the same time, which either means that she’s pregnant now or plans to get pregnant in the very, very near future.

I’m guessing that this is more or less unofficial confirmation of her impending second pregnancy, but it’s also annoying that we keep dealing in speculation surrounding this massive attention-seeker. Kim knows that the pregnancy talk gets the press riled up and the rumor mill going, and she loves to tease her BFFs the paparazzi with the speculation. Even though she’ll start whining and crying about the attention once she actually gets pregnant, you know she revels in the spotlight – until people start making fun of her weight gain again, and then she’ll regret the whole thing.

But too bad for her, she’s pretty much forced to do whatever Kanye wants, for fear of him leaving her. There’s no way Kim can sustain the Kardashian brand on her own, especially without Kanye’s talent to keep her relevant. So Kanye wants baby? Kim gives him baby.

Kim and Nori enjoy a photo opportunity – time for Mrs. West to show everyone what a great mom she is!