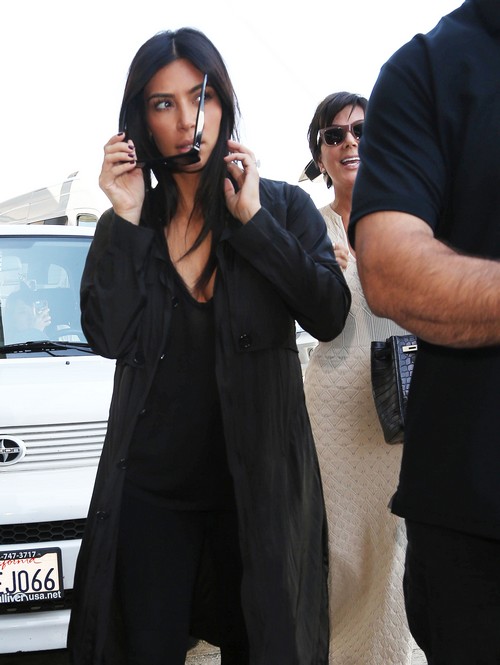 Kim Kardashian became the laughingstock of the media two years ago, when she got pregnant and then started roaming the streets in tighter and tighter clothes. I’m not sure what she was trying to do, but who on earth wears form-fitting spandex when they’re pregnant? In addition to being incredibly uncomfortable, they also look ridiculous. And that spandex was nothing compared to Kim squeezing her pregnant feet into tiny shoes, which led to incredibly gross and distorted feet being captured by the paparazzi.

Two years later, Kim still whines about how she was treated by the paparazzi, conveniently glossing over the fact that she brought it all down on herself. She’s the one who used to call them, so of course they’re going to come running every time she’s out. Of course they’re going to take pictures of her and scrutinize every inch of her, since she built her entire career around her looks. It’s a very ‘duh’ moment, and it makes Kim look even stupider than people already suspected. The fact that she knew that the paparazzi would be following her, and yet she would wear such asinine attention-seeking outfits that were so incredibly unflattering.

Of course, there are already rumors abounding about Kim’s second pregnancy. Many sources close to Kim have been dropping hints that she’s pregnant again. She’s definitely gained weight, but is that due to binge eating and unflattering outfits – or because she’s pregnant? Kanye West has been very vocal about wanting a lot of children, so I’m sure he’s putting pressure on Kim to give him his second child. And Kim won’t want to disappoint Kanye and risk losing him, so she’ll do it. She’ll risk the humiliation that she faced the first time around, and she’ll give him his second child. In fact, if she’s already pregnant with her second kid, the recent weight gain and bloat make sense. But I’m already dreading the second round of horrid maternity wear, especially now that the Kardashians have dipped their toes into fashion.