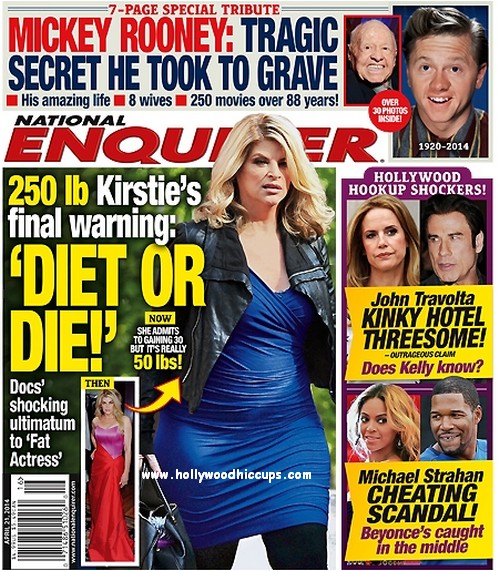 Kirstie Alley is teaming up with Jenny Craig again, even though her entire weight loss promotion last time turned out to be a giant front for Scientology products. Kirstie’s weight loss brand, Organic Liaison, was basically a tool to shill Scientology vitamins, and a dissatisfied customer ended up suing Kirstie. But even though everyone knows about this, Jenny Craig thought it would be a good idea to team up with Kirstie again. I guess they prescribe to the notion that there’s no such thing as bad publicity?

Kirstie gave a statement announcing her partnership with Jenny Craig, explaining, “I’m not like, circus fat. I just want to lose 20 pounds.” She also appeared on the Today Show on Monday morning to discuss the deal, adding, “I feel amazing because I feel healthy and I feel happy.”

So Kirstie wants to lose some weight. But what’s the real reason behind this partnership? It’s a two-way street, as Celebitchy points out. Kirstie’s shilling Jenny Craig, but in exchange, Jenny Craig will also be selling her ‘Organic Liaison’ products. Basically, Kirstie agreed to do this,  but only if Jenny Craig helps her sell her Scientology products. It doesn’t matter to Kirstie that she’s already lost a lawsuit concerning her Scientology-promoting products, she’s so loyal to her cause that she’s willing to do it again and again until she succeeds.

I have to say though, I am surprised Jenny Craig agreed to this. Sure, they’re hard up for some brand ambassadors, but I feel like they could have gotten a better deal with another actress. Sure, they probably wouldn’t have gotten someone with the name recognition that Kirstie Alley has, but really, I don’t think anybody takes Kirstie seriously anymore.. do they?