Kourtney Kardashian Forcing Another Baby On Scott Disick: Is She Pregnant? (PHOTO) 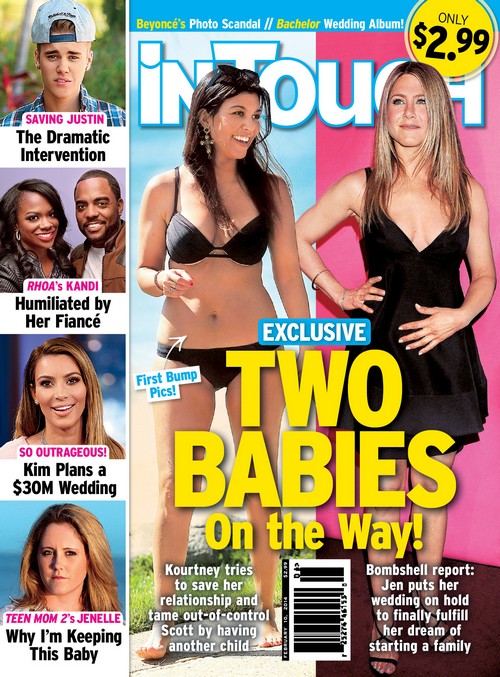 Kourtney Kardashian has been on a mission since day one to try and save baby daddy Scott Disick from himself. They seem to have good points followed by really rocky patches and these last few months have definitely been bad. Scott has lost both of his parents in just a few months time and rather than leaning on Kourtney he has been partying like crazy. According to the Feb. 10th print edition of In Touch magazine Kourtney may have totally gone off the deep end herself. She is rumored to be planning baby number three with the thought that another child will reel Scott back in.

I have to say this idea makes no sense to me. When Kourt was pregnant with Penelope Scott all but abandoned her so I can’t imagine her being willing to risk this plan backfiring and her ending up caring for two little ones while pregnant with a third! Speaking of pregnancies, In Touch is also reporting that yet again Jennifer Aniston is ready to fulfill her dream of motherhood and has shelved her wedding plans.

Obviously Jennifer Aniston and Justin Theroux’s relationship has become strained at best, but is she really ready to be a single mother? We always hear about Jen’s dream of babies but I have to wonder if that really is her dream or just the one that the media has created for her!

Can Justin Bieber be saved from his hard partying lifestyle? Well a crew of people closest to the teen star trailed him down to Panama to try and stage an intervention. In Touch has all of the latest details but in the meantime, do you think that Biebs wants to save himself? Tell us your thoughts in the comments below!