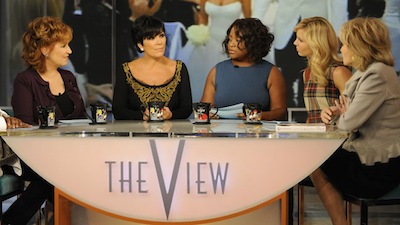 Kris Jenner was featured on The View, where she was interviewed by Barbara Walters and Chris Harrison about her late husband Robert Kardashian and his association with the O.J. Simpson murder trail. They also took a look back at Barbara’s 1996 interview with Robert following the O.J. Simpson murder trial for the death of his wife, Nicole Brown Simpson and Ron Goldman.

Although Robert was O.J.’s defense attorney, even he didn’t seem convinced of O.J.’s innocence at the time. When asked by Barbara, he merely said ‘there is a doubt‘, instead of standing by the defense’s statement. I mean, when your defense attorney doubts you’re innocent, that says something, doesn’t it?

Even to date, I don’t know if there are many people who don’t believe that O.J.’s guilty, although he did get his just rewards with his incarceration for the robbery a few years later. Kris Jenner also has her own, interesting take on the situation. She claims that Nicole told her days before the murder that she felt that she was in ‘danger’.

Kris also claims that Robert Kardashian was almost accused as an accessory after the fact, adding that the prosecutor initially offered O.J. 12 years but he refused. Of course, Kris also adds that despite their close friendship, Robert had nothing to do with the murder. Well, duh. Of course she’s going to make it seem as though Robert was innocent, and in the strictest sense of the word, he was. But he still helped to get O.J. off during the trial, along with the other defense attorneys. I don’t know if I’d call that ‘innocent’, per say.

Whether Kris is telling the truth or just being her usual famewhore self, you tell the difference. It’s hard to believe that she wouldn’t have brought up these little tidbits by now, but to be fair, Barbara did bring up the topic first. However, the new season of Keeping Up With the Kardashians is about to premiere soon, and Kris might be saying whatever she feels will drum up the most interest, especially since last season’s ratings were terrible.

What do you guys think about Kris’ revelations? Let us know in the comments.