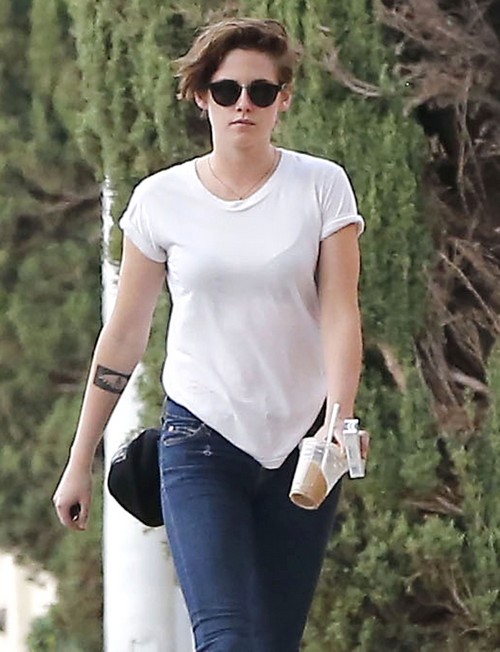 Kristen Stewart is currently promoting Camp X-Ray, which is about a female soldier who becomes a prison guard at Guantanamo Bay. She gets caught up with a prisoner while she’s stationed there, and basically, starts questioning the morality of the prison and her superiors. It’s one of those films that’s meant to shed light on the moral grayness that exists in fighting terrorism, and people’s arguments can fall all over the spectrum in regards to where they stand on this issue. However, Kristen issued some concerning comments while promoting the movie, and I can’t tell if she’s just being facetious or whether she really means it.

Kristen explains, “All she want’s to think is ‘They did 9/11, they’re bad, f*ck that, I’m going to do my job and I’m going to do it well,’ But then she gets down there and just can’t accept it; she can’t conform to that.”

Ok, everybody in the world knows that the whole Patriot Act and everything that falls under it is controversial politically. The question Kristen is asking becomes – to what extent can you justify the means to guarantee peace? See, Kristen’s above comment says just that, so that’s fine. But then she starts defending terrorists and suspected terrorists, and that starts becoming a problem.

Kristen basically says that judging any of the detainees and prisoners at GITMO is ‘f*cking evil’ and ‘crazy’ because they’re all people too. She further explains, “It’s a ridiculous idea for you to think that you know anything for sure in life—other than to take care of your fellow people. Where the f*ck do you get off thinking otherwise? These two people couldn’t be from more different worlds and perspectives, and probably disagree fundamentally on most things, but there’s a through-line for all of us—and that’s what people forget, and that’s what makes people capable of doing terrible things to each other. What makes you different from any other person that walks the earth?”

Uhmm sorry Kristen, we do get to judge people, terrorists, who would destroy us. In fact we need to judge them and stop them before they kill us. It’s a problem because most of Kristen’s fans will blindly follow her no matter what she says, and defend her no matter how wrong she is. If it was anybody else saying it, I wouldn’t give it a second thought, except maybe have a civil discussion with them about the pros and cons of detaining people at Guantanamo. But since Kristen’s fans are so naive, she’s going to be influencing an entire generation of her fans to go off and defend people that are either terrorists or have ties to terrorists. A certain percentage of these prisoners could be completely innocent, sure, but of course we’re going to ‘judge’ someone who intended to bomb and kill hundreds or thousands of innocent people – no matter how ‘different’ their worldview is. Then again, this is the same person that once compared being photographed by the paparazzi to being raped.

But it wasn’t enough to defend terrorists, Kristen went on to put down in the most pretentious terms imaginable people who join the US Armed Forces, calling them inadequate, mindless, and stupid. Speaking about the character she portrays in the movie: “She’s simple, not very smart, and really socially inadequate-but a good person. So, if you can sign up, put a uniform on, and erase yourself, you don’t have to consider yourself anymore.” Seriously, Kristen Stewart is one of the most polarizing people to emerge from Hollywood lately. Imagine the arrogance on Kristen to dare to put down the men and woman who risk their lives to keep us (and her) safe and able to enjoy our wonderful Western Liberal Democratic Pluralistic Diverse Lifestyle, fighting the very terrorists who would destroy us and see us back in the dark ages?

‘Camp X-Ray’ actress Kristen Stewart stops by a friends house for a visit and gets a parking ticket in West Hollywood, California on October 13, 2014. In a recent interview Kristen indicated that terrorists at Guantanamo Bay are misunderstood and that joining the United States Armed Forces is the job of a simpleton. She definitely will lose some fans over this statement. FAMEFLYNET