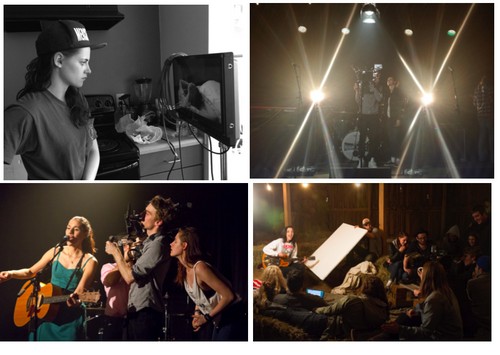 Kristen Stewart is set to make her directorial debut with a music video from Sage + The Saints. After hearing her ‘poetry’, I’m a little bit frightened about what this entails, to be honest.

The problem with many actors and actresses moving onto other spheres of entertainment is that they’ve always been fraught with misfires and failures. This is largely because celebrities – especially actors – are told over and over again that they can do no wrong, by everyone that they surround themselves with. If everyone around you kissed the floor you walk on, of course you’d think you were a brilliant visionary who could do everything, right? I mean, why not be a poet and a director and a model and an actress, etc, etc.

And to be fair, Kristen is a great model. Maybe it’s because she’s so good at making her face blank, which is also why she’s so great at playing Bella in Twilight. Either way, being a successful actress doesn’t automatically mean you’ll become a successful or even good director, and only a few people have crossed that bridge.

Anyway, Kristen is a friend of Sage Galesi, so it makes sense that her debut would be with the Sage + The Saint’s music video, titled ‘Take Me To The South’. The Nashville-based band, Sage + The Saints, will be releasing their album this October, and the music video was shot in Los Angeles and Nashville, and produced by Starlight Studios.

Kristen gave a statement on the experience, explaining, “Working with Sage + The Saints for my directorial debut was a fantastic and rewarding experience. I’m extremely proud of what I and my co-creators at Starlight Studios have accomplished, and grateful for the Buffalo Blank Check Series for facilitating our creativity and artistic vision.”

The music video is a part of the ‘Blank Check Series’, which is a program that, “supports self-expression and the arts by partnering with today’s cultural innovators.” It was launched by Buffalo David Bitton, Macklemore, and Ryan Lewis, and it’s used to create ‘engaging multi-dimensional content‘, all with a ‘blank check’ from the producers.

Oh lord, that means that Kristen was given an unlimited budget for her ‘vision’, which means that the music video will no doubt be some abstract and artsy thing that nobody will get, but that everyone will pretend to fawn over.

What do you guys think about Kristen’s directorial debut? Let us know your thoughts in the comments below.