Kristen Stewart Spotted With Rumored Girlfriend Alicia – Is She Moving On From Robert Pattinson? 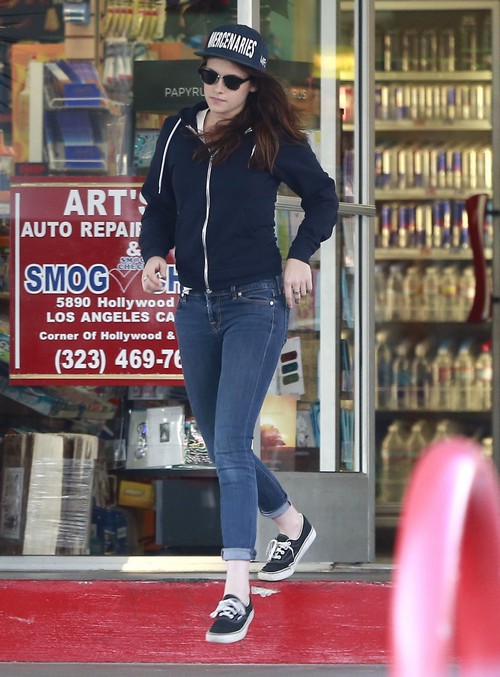 Kristen Stewart is currently in Los Angeles, spending some time off from work and hanging out with her friends. Now, the ‘Kristen Stewart is a lesbian’ stories have been done plenty of times before, but we recently got a tip-off from a source that Kristen might be getting close to one of her best friends.

Now, we obviously can’t confirm or verify the accuracy of this source, but there’s a lot of people in the Twi-hard and Kristen fan community who believe that Kristen is dating one of her close friends, Alicia. In fact, X17 Online captured photos of Kristen, Alicia, and her friends having dinner in Malibu. According to our source, Alicia happens to be wearing a red sweatshirt which apparently belongs to Kristen. Again, friends exchange articles of clothing plenty of times, but this can fit into the Kristen Stewart is a lesbian narrative, if you’re willing to believe it with such flimsy evidence.

Anyway, it’s not clear what’s going on with Kristen’s love life, even if her fans believe something and the general audience believes something else. For now, she’s ‘officially’ single, although that really doesn’t mean much when a celebrity is as publicity-shy as Kristen. Robert Pattinson is rumored to be dating a new girl every other week, but Kristen’s definitely managed a lower profile than her ex-boyfriend. A part of that has to do with her getting photographed less, but really, it’s because Rob’s career has been in the spotlight more recently.

Do you guys believe Kristen Stewart is dating her friend? And do you believe that she’s a lesbian? Or is everyone simply jumping to ridiculous conclusions? Let us know your thoughts in the comments.