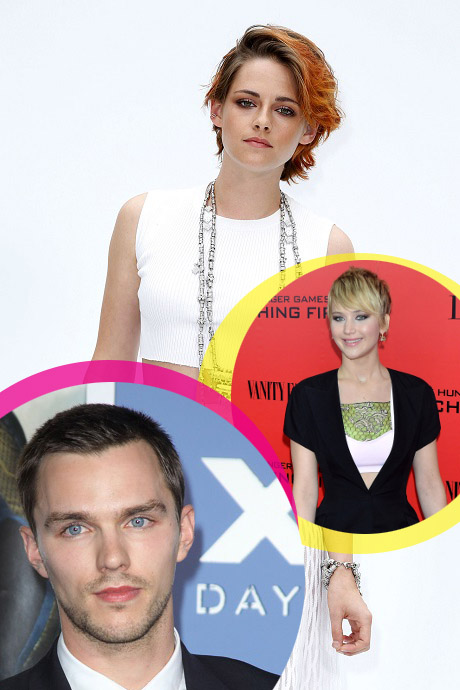 Kristen Stewart and Nicholas Hoult will be appearing in the upcoming film Equals together and, given the closeness of their two characters (and the fact that Jennfier Lawrence and he recently broke up), people are beginning to speculate that he and K-Stew might be more than just co-stars. The two were spotted dining together and, while at a press conference, Nicholas and Kristen put some quotes out into the universe that suggested they might just be open to love — both on and (maybe even) off screen.

Nicholas said, “It’s always a weird position to be put in any film where the director chooses two people and is saying, ‘Hey, potentially in this world I’m creating you two could fall in love.’ Sometimes [this kind of situation] feels forced and tricky and awkward, but the kind of environment [director Drake Doremus] created was straightforward and easy. Kristen is a great actress, and that just makes it very relaxed and my job very easy.”

Now, don’t even think about leaving before glancing at what Kristen had to say:

“I’m definitely not afraid of ‘feels.’ My life revolves around it, actually. Finding the balance between the head and the heart is important – but I’ve always been very driven by the gut.”

Taking into consideration Kristen’s history, we definitely believe her life revolves around the “feels.”

So are people just making mountains out of mole hills, as they tend to do? Or has Kristen inserted herself into yet another epic love triangle, another twisted Hollywood romance? Leave us your thoughts in the comments section below!