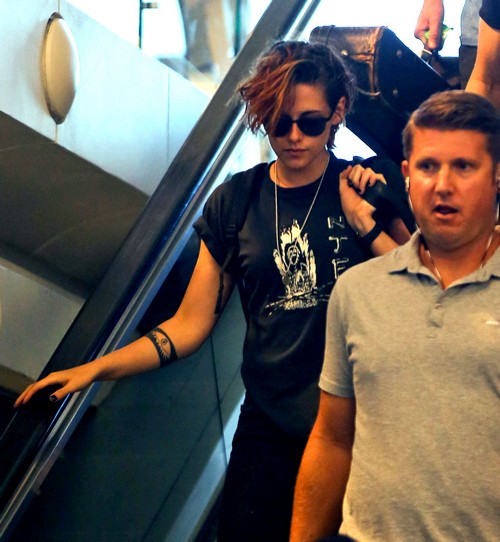 Amid rumors that Jennifer Lawrence and Nicholas Hoult had broken up, Nicholas and Kristen Stewart were spotted having sushi in Japan. Now, before we jump to conclusions, I will point out that Nick and Kristen are filming a movie in Japan called Equals. But with Kristen single and Nick [supposedly] single, what’s to stop them from hooking up?

I know people are already spouting friend code, but are Kristen and Jennifer friends? I don’t mean friendly acquaintances who exchange emails every once in a while and meet each other at formal events. I mean legitimate friends who will set aside times to see each other despite their busy schedules. Yeah, exactly.

Plus, this sort of thing happens a lot more in Hollywood [and real life] than people like to admit. That’s one of the reasons that the gaffers and grips on set have such great gossip – they witness it all in action during filming, when things usually get hot and heavy between costars. Sure, the stars try to hide it during promotion and press, but the rumors always, always get started on set.

Now, the sushi date between Nick and Kristen could just be an innocent friendly date. I mean, they are co-stars for a few months, and they have to get along. Plus, they have to sell chemistry as romantic interests on film, and that won’t work if they don’t spend time off set. But haven’t you always got the feeling that Kristen was secretly jealous of Jennifer’s success, and would do anything to get her life? She’s already got a Chanel contract, and even though she’ll never have Jennifer’s critical acclaim, she could always make a play for Jennifer’s ex-boyfriend.

Of course, we don’t know for sure that Nick and Jennifer are even broken up, but as we already know, that sort of thing doesn’t stop Kristen once she’s put her mind to it.

What do you guys think? Will Kristen and Nick have a steamy on-set affair? Is Kristen trying to prove that she’s better than Jennifer in at least one aspect? Let us know your thoughts in the comments below.