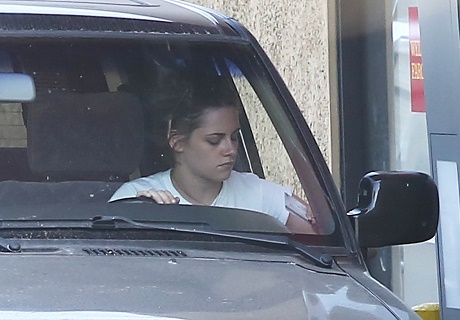 Kristen Stewart’s reputation is forever tarnished after she cheated on Rob Pattinson with married director Rupert Sanders.  It seems like Stewart will never live down the affair that rocked the media and legion of Twilight fans, especially if Rupert’s now ex-wife, Liberty Ross, has anything to say about it.  Liberty and Rupert’s high-profile divorce has finally come to a close, but Liberty is not ready to move on from the pain that Kristen and Rupert’s affair caused her, and is determined to destroy Kristen’s reputation.

According to the October 13th edition of OK! Magazine, Liberty has written a tell-all script exposing all of the dirty details of Kristen Stewart and Rupert Sander’s affair, and she is trying to sell it!  The magazine explains, “Kristen Stewart is in a panic, and it’s not over a pack of vampires.  Liberty Ross, the ex-wife of Rupert Sanders, who Kristen had an affair with two years ago, is shopping a TV show based on the incident.”  OK!’s inside source explains, “The show is about a young actress who has an affair with a married movie director she is working with.  The juiciest stuff has yet to be revealed, Kristen thinks it is the final twist of the knife.”

Wow, the only thing worse than a woman scorned, is a woman scorned with Hollywood connections.  The only saving grace in the scandal surrounding Kristen Stewart and Rupert Sanders is that details were few and far between and none of the parties involved really spoke out and explained what happened in detail.  Kristen already lost millions of fans when she cheated on Rob Pattinson — if Liberty’s TV show goes public, it’s like ripping the band-aid off the wound that was finally starting to heal.

Do you think that Liberty’s TV show about Kristen and Rupert will actually make it to the screen?  How do you think Kristen and Rob’s fans will react?  Would you tune in to Liberty’s revenge show?  Let us know what you think in the comments below!