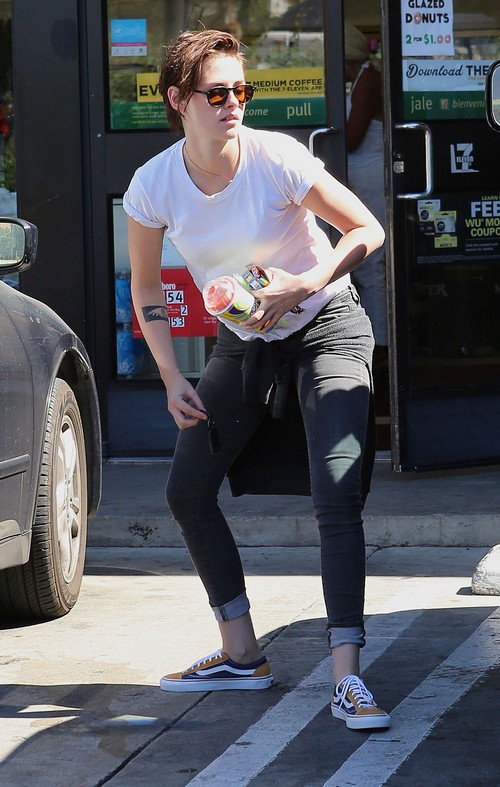 Kristen Stewart is heartbroken over losing Robert Pattinson to FKA Twigs, aka Tahlia Barnett. Now KStew has learned that Rob plans to move to London with Twigs and settle down. Batten your down your hatches, Twi-hards, your beloved Robert Pattinson is about to leave Los Angeles. In a recent interview, Rob hinted towards leaving the city because he was getting sick of it, but I’m thinking it has a lot more to do with someone that rhymes with figs. Ding ding ding, FKA Twigs. Come on, could he be any more transparent?

Robert Pattinson and FKA Twigs are dating, she is Rob’s new girlfriend even if their reps haven’t issued a ‘confirmation’ of their relationship as of yet. Maybe Rob and FKA just don’t feel like putting a label on it, or maybe they’re just having fun. In the technical definition of dating, they’re both doing it, and that’s good enough for us.

However, the reason that Rob spent so much time in Los Angeles seemed to be because his ex-girlfriend, Kristen Stewart, lived here – and before they broke up, their entire lives pretty much revolved around each other. Rob and Kristen spent all their professional time together making the Twilight saga, and then all their free time hanging out with their friends in LA. And at the time, Rob’s friends = Kristen’s friends. Obviously, things have changed since their breakup, but Rob’s constant partying started to hint that he had become accustomed to LA and was enjoying it here. He even said as much in the past, where he admitted that he had grown fond of LA and its people. But maybe he finally came to his senses and realized that LA – and Hollywood, in particular – is filled with sycophants and users, and he’s better of away from the city. Or maybe Rob finally realized that he’s over Kristen, and that he has a new girlfriend now. Time to up and leave his life for her! Ok, maybe I’m exaggerating a little, but doesn’t it seem like Robert Pattinson’s life always revolves around his relationships? Perhaps that’s a product of media illusion, but maybe it’s also true – at least, partly.

Of course, let’s just say that Robert Pattinson is moving to London or NYC for FKA Twigs. How is Kristen Stewart going to react to that? Probably not too well, eh? She waited two years for him, and that’s two years that she’s never getting back. We can’t blame her for being super bitter and heartbroken, but then again, she’s the one who cheated on him. It’s been two years, bla bla, but still – if it wasn’t for that little affair, I doubt that Robert Pattinson and Kristen Stewart would have ever broken up. And he wouldn’t be moving halfway across the world for his new girlfriend. If rumors are to be believed [and take those with a grain of salt], Rob’s so serious about FKA that he’s planning on getting married to her and having babies with her. Can you see Robert and FKA Twigs married with children. I say he’s still way too young for that, but hey, who knows?