Robert Pattinson and Girlfriend FKA Twigs Holding Hands Photo: Breaking Up – She’s Too Much For Him? 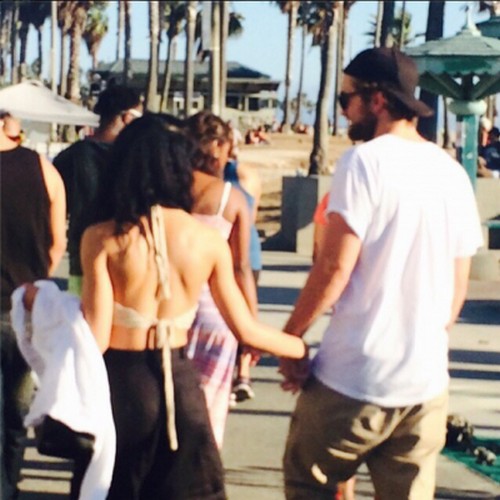 Robert Pattinson and girlfriend FKA Twigs were photographed holding hands in Venice Beach, once again bringing light to their are-they-dating-or-not relationship. Robert Pattinson is a very funny, self-deprecating, talented, and charming actor. But he’s also very…. well, staid, isn’t he? I don’t claim to know the man, but he dated Kristen Stewart for so many years, rebounding only with a handful of actresses and models last year. His romantic life hasn’t exactly been a barrel of adventures, nor should he be looked down upon for that. He’s clearly into committed, monogamous relationships [wish we could say the same for his ex-girlfriend], and he clearly enjoys that. And that’s exactly why it doesn’t come as any surprise that his ‘relationship’ with FKA Twigs is already rumored to be falling apart.

To be fair, his reps haven’t really confirmed that FKA Twigs and Rob are dating. The only thing we know so far is that they’re spending a lot of time together, hooking up, and going on dates. But officially dating? Not yet. What’s the difference exactly, can someone explain?

However, we’re also hearing from several sources that Robert’s not sure that he even wants to date FKA Twigs. She apparently feels the same way, which is why they’ve been taking it casual for so long. See, to him, he’s used to dating actresses and models, not punk rock singers who could probably beat the snot out of him if they tried. That girl is majorly hard core, and he’s… well, he’s not. He’s not a stuffy Brit, but he’s not a crazy rocker dude, either. He tries to be hipster, but mostly, he just comes off as lazy and unwashed. Plus, he knows the media’s going to make her life a living hell if she dates him, and he doesn’t necessarily want to put her through that.

On her end, FKA knows that spending time with Robert Pattinson is going to help bring attention her music. And heck, she’s probably attracted to him – he resembles a foot sometimes, but the guy’s still very good looking. But apart from that? Have you seen her? She can probably eat Sparkles for breakfast, never mind dating him for years.