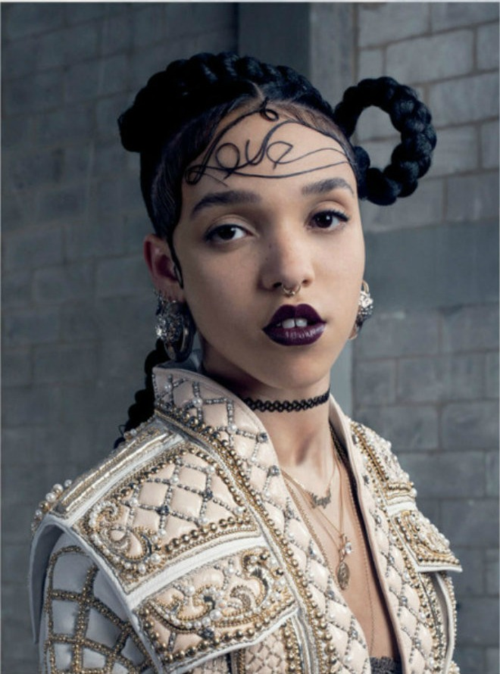 You may not have heard of FKA Twigs just yet, but you will soon. The sexy, smoldering singer/dancer out of London is making beautiful music dating Robert Pattinson as his new girlfriend. The singer, real name Tahliah Barnett, 26, has a very unique style with several songs under her belt that highlight her simply gorgeous voice and undeniable musical talent.

Some may consider the timing of her budding romance and emergent dating with Pattinson pure coincidence, while naysayers will likely point out that her debut album, LP1, was just released this month.  While she already has a decent fan base, she has, for the most part, gone under the radar until now.  Born in England, Twigs went by the nickname as her career as a dancer took off. After another artist who goes by the name of Twigs complained, the “FKA,” which stands for “formerly known as,” was added so that she could keep “Twigs” in her name.

The talented Twigs has starred in several music videos, performed as a back-up dancer for many popular artists, and appeared in a short comedy sketch on 2011 titled Beyonce Wants Groceries. Twigs, who is of Jamaican, English, and Spanish descent, was given a positive review of her debut album by Time magazine. They touted Twigs’ talent by sharing that she has “made that transition to one of the most compelling and complex acts in R&B.” Very impressive. Twigs’ music has been tied to many genres including Trip Hop, PBR & B, dream pop, and experimental. Several of her music videos can be viewed on YouTube as well.

While FKA Twigs certainly has the talent to sustain a decent career, and to grow her fan base without the help of a dating a celebrity, we can’t help but wonder if the timing of her album release and her new exposure as Robert Pattinson’s girlfriend spell trouble for the Twilight actor, or if it is just pure coincidence.

What do YOU think CDLers?  Does she have ill intentions, or did she fall for Pattinson’s charm? Let us know what you think below!