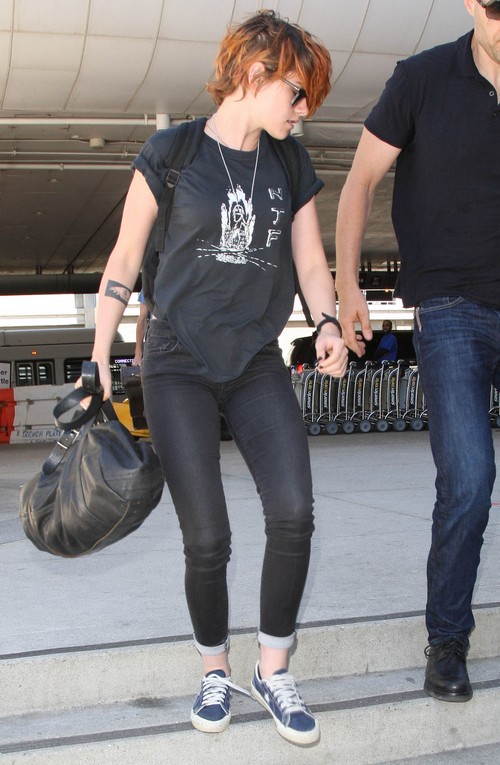 Robert Pattinson is dating FKA Twigs, moving on from Kristen Stewart at long last. It’s about time, right? It took him almost two years to find a new girlfriend, even though he’s had plenty of flings over that time period. However, even though he’s clearly happy in his new relationship, Kristen is left moping by the wayside. There’s no way she waited two years for a chance at getting back together with Rob, only to be thwarted by some random rocker chick. And that, ladies and gentlemen, is exactly what happened. Now Krisetn wants to be dating Robert again in a Twilight reboot!

Robert Pattinson finally stopped mooning over Kristen Stewart, and started dating FKA Twigs. Not only that, but he’s been aggressively showing off his relationship with FKA, considering all the PDA they’re constantly engaging in. I’ve said it before and I’ll say it again, but Rob and FKA have shown more PDA in two weeks than Kristen and Rob showed in three years. That says something, don’t you think? Plus, there are even rumors rumbling about how Rob wants to propose to FKA and how they’re all set to get engaged. I find these particular rumors a little bit more difficult to believe, but that doesn’t mean that it’s impossible.

Of course, there are enough rumors about Kristen possibly, probably, maybe dating Nicholas Hoult, her co-star on Equals. They’ve certainly been spending enough time together to justify all the rumors, and they’ve been spotted hanging out all over Asia. Sure, they’re with the rest of their crew, but in Hollywoodland, two co-stars spending time together equals them sexing each other. It’s just the laws of the universe, guys.

Now, even if Kristen is officially or unofficially dating and/or hooking up with Nicholas Hoult, the fact that she waited this long is a testament to how much she wanted Rob back. But alas, even if she enjoys spending time with Nick, her heart lies with Rob, right Twi-hards? It’s really too bad that he doesn’t feel the same way, even if she’s desperate to win him back at any cost. But really, how’s she going to manage that? She’ll have to break up Rob with FKA Twigs, and then convince him to date her again. He may be a celebrity, but he’s not a fool. He dumped her once, he dumped her twice, and he’s not going to put himself in a position to dump her a third time.