BY Kristine Francis on May 22, 2014 | Comments: one comment
Related : Reality TV, Recap, Television 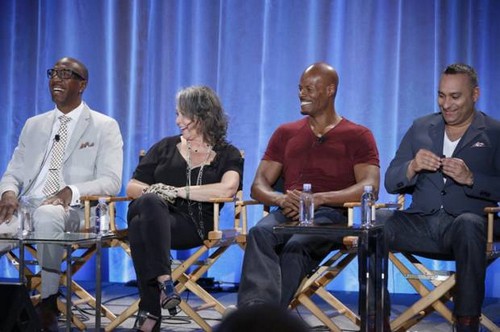 Tonight on NBC The Last Comic Standing is back with its eighth season, its the premiere night!  On tonight’s first episode season 8 of the star search for America’s funniest comic kicks off with auditions. Roseanne Barr, Keenen Ivory Wayans and Russell Peters are the judges. J.B. Smoove is the host.

On tonight’s episode America’s most compelling comedy competition is back with three new celebrity judges – comedy icons Roseanne Barr and Keenen Ivory Wayans, along with international comic sensation Russell Peters – as well as dynamic new host JB Smoove. The Emmy-nominated series resumes its search for the funniest comic in the country, with the top 100 comics handpicked to audition by invitation only. This week kicks off the hilarious auditions, with America’s best comics performing their funniest sets, each hoping to secure a coveted spot as a semi-finalist.

The Last Comic Standing airs tonight at 10PM EST and let us know what you think. We’ll be recapping all of the hilarity right here for you. You think there will be any funny comedians? Hit up the comments and let us know your thoughts!

Last Comic Standing is back for an all new season of laughs. And though there have been a few changes – this season promises to be even funnier than the last.

Over a 100 comics across the country are invited to give their best in front of a live audience and a quite a scary panel of judges. Announcing all three new judges this season – comedy icons Roseanne Barr (“Roseanne”) and Keenen Ivory Wayans (“Scary Movie,” “In Living Color”), as well as international comic sensation Russell Peters (“Comics Without Borders,” “Russell Peters Presents”) otherwise known to most Americans as that funny Canadian. Lastly JB Smoove comes on as the new host and honestly his normal everyday excitement alone could probably fuel the show. So yes there are changes, but nothing that would potentially harm the show.

And the number one evidence of that is when the first comedian to come onstage was able to wow everyone with his own twist of dark and sarcastic humor. He was able to turn a missing child story into an interesting twist of annoying parents. So it was crossing boundaries and yet not enough to come off as offensive. It was just senseless fun.

He was followed up by Tracey Ashley. Known for her numerous quirks offstage, she was able to cross lines onstage to reach out to everyone on a different level as well making a few racial jokes with a twist. It’s possible no one ever thought as Oprah’s possible involvement in the Underground Railroad as being funny before Tracey presented it.

Up next was Guy Branum. He’s quite tall and very obviously gay. Two things he could have ignored, but instead chose to bring into his set to say “hey, this is how I am and its class act all by itself”. Plus it didn’t hurt to see him bring that same bite to chew out an audience he foolishly led into a trap. He asked who hated reality TV and after most of them agreed – he told them how stupid it was to complain about fighting housewives when they easily sit down for three hours to watch grown men fight over a ball. At least a christening stub is understandable. Then once Guy was finished he couldn’t help himself from flirting with Keenen.

In a quick session of montages – David Waite, Phoebe Robinson, and Rob Christensen are introduced. They are funny however not a lot was seen of them to detect how well they were able to pull of their acts.

What little was seen of Mark Normand was funny. He hasn’t been doing this for long and still he was funny in a self-deprecating way. One of the most useful pieces of materials for your acts will always be your home life and that’s why the comedians that come onstage unafraid to make fun of themselves are able to build a rapport with the audience.

Take Joan Rivers’s protégé Lynne Koplitz. She wasn’t afraid to beat herself up for the amusement of others. And even the judges approved.

Then there’s Dave Stone. He lives in a van. Not a nice compact RV, but in one of those white vans that frequent the police and/or news feed. So David has a lot riding on this competition and knows how much winning would change his life. But that nervousness could have impacted his jokes. He was good. There is no doubt about that. However (and Keenan was the one to point this out) he hasn’t grown a particular voice. You don’t know if he’s a dark humor kind of guy or a self-deprecating guy. He still needs more work.

Out of all the judges, Keenan seems to be the most critical. He has informed contestants when they’re too wordy. Like with Rod Man. Everyone had enjoyed it and Roseanne could once again be heard laughing out loud to his jokes, but Keenan warned the comic of keeping his act tight.

A second montage consisted of Erik Riveria, Andi Smith, and Tim Northern came on. And not much can be said about them just like in the first montage. Only this time it ended with Aida Rodriguez. She was good and the only deterrent to appreciating her set was the fact that her dress was a little bit too eye-catching. She is a beautiful woman after all and adding a short bright yellow dress only made Keenan claim he hadn’t heard a single word.

The last act of Part I Invitational was Joe Machi’s. This soft spoken man managed to pull off all these twists and turns to his jokes that Russell confessed he drew in the most laughs. And he did. Joe had people stitches by simply using his face. And that didn’t even look like he was doing it on purpose.

Only a few comedians were able to move forward at the end of Part I onto the next round, the Semi-Finals, while the rest were left on the cutting block. Though rather than being able to take a breath – the remaining few are filled with anxiety. There’s a lot on the line for everyone still there. Winning will do more than just showcase their sets to a much wider. It’ll also give them a chance at selling their own idea for a sitcom to NBC Studios. You know that place that green lighted “Friends” and other shows like “Will & Grace” and “30 Rock” just to name a few.

Yet it’s surprising when anyone, who had come to this show hoping to win, foolishly ruins their own odds with downright rude behavior. Following on the heels of notable talents Erin Jackson, Jimmy Shubert, Lachlan Patterson (the man that loves buffet more than he does people), Gloria Bigelow, Patrick Susmilch, Shakir Standley, Mike Vecchione, and Jasper Redd ( I know it sounds like a lot but I am getting there) there was unfortunately Ben Kronberg.

Ben was an ass. He wasn’t that great with his audience and when the judges tried to give him some much needed constructive criticism – he pulled off a major hissy fit that only served to make him look stupid. Thus he ended his career with NBC to the soundtrack of boos from the audience.

The last guy won’t be making it to the semi-finals and nevertheless after all is said and done Ben will continue to be memorable simply for his attitude. Which can’t be said for everyone. Dana Eagle, Pat Regan, Bob Kubota, Chase Bernstein, Michael Somerville, and Tyree Elaine were all talented. Though some were given a wider time slot. So the problem with remembering a few of them stands with the way they were edited into this episode. As if the editors gave their best the limelight and merely wanted to squeeze the rest of them in. They’ve apparently already chosen their favorites. And if it weren’t for the judges picking people of their own accord for the semi-finals then some would think this contest was fixed. Luckily this show is not a repeat of the “X-Factor”.

Nick Guerra was the last comic for the second week of Invitationals and he cracked the audience up with his take of women going out together. His power was more in the way he used his body to a point than it was in the jokes itself. But it was still funny so no wonder he won a ticket to the semi-finals.

Next week will just as nerve racking as tonight and even though it hurts to watch some jokes fall flat – the comedic hour has mostly introduced a round of fresh faces with a new invigorating take on jokes we all thought we were done with. I know I can’t wait for to see what the rest of the best have to offer. What about you?