BY Kristine Francis on May 29, 2014 | Comments: one comment
Related : Reality TV, Television 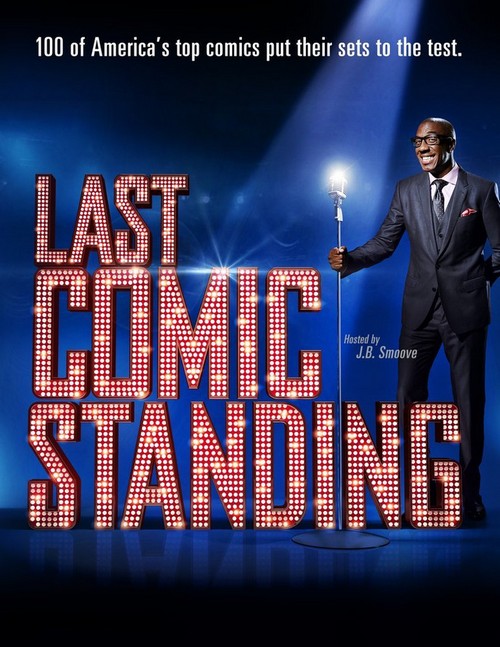 Tonight on NBC The Last Comic Standing is back with the second episode in its eighth season. On tonight’s episode invitational auditions continue.

On last week’s episode America’s most compelling comedy competition was back with three new celebrity judges – comedy icons Roseanne Barr and Keenen Ivory Wayans, along with international comic sensation Russell Peters – as well as dynamic new host JB Smoove. The Emmy-nominated series resumed its search for the funniest comic in the country, with the top 100 comics handpicked to audition by invitation only. Last week kicked off the hilarious auditions, with America’s best comics performing their funniest sets, each hoping to secure a coveted spot as a semi-finalist. Did you watch last week’s episode?  If you missed it we have a full and detailed recap, right here for you.

On tonight’s episode the hilarious invitationals continue as America’s top comics engage in a fiercely funny and fast-paced competition to try and secure a coveted spot as a semi-finalist. After watching the comics deliver their funniest sets, judges Roseanne Barr, Keenen Ivory Wayans and Russell Peters decide who will move on to the semi-final round, one step closer to an incredible prize package worth $250,000, including a cash prize, a talent deal and a development deal for a television show. JB Smoove hosts the Emmy-nominated series.

The Last Comic Standing airs tonight at 10PM EST and let us know what you think about the show so far. We’ll be recapping all of the hilarity right here for you.  Do you think there will be any funny comedians? Hit up the comments and let us know your thoughts!

Fourteen comics have been chosen so far and now during the third week of Invitationals – the comics are gearing up for a fight. They’ve undoubtedly heard back on whose going to the semi-finals and whose been sent home. So they have to know by this stage what will work or else they’ll just be – dare I say it – someone who never had that much talent to begin with.

The first up for the night was Tony Baker. He kept up on his repertoire on complaining about his kids although he had a fresh spin on it. It wasn’t the same old jokes like how tired he was or how out of control his kids were. Instead he opened up with the fact that he now has to sleep with one eye open or he’ll fear his teenage son beating him to a pulp. So it had a quirky twist to it and the judges love a joke with a twist. If they see where you’re going with it then the joke falls flat.

Thankfully Alingon didn’t have this problem. He’s a tax consultant by day and a comedian by night, but more importantly he’s not afraid to make fun of himself. Yeah, his job is boring and people often get his nationality wrong yet that doesn’t mean he can’t turn it into a joke. And somehow he crafted into a funny tale.

DC Benny on the other hand had some mishaps. His set was still funny however he kept firing off antidotes without really giving them time to settle and once he realized his mistake – there wasn’t a lot of time left. So he could have been funnier if only he had more time to get into the groove of things.

While Kelly who’s also been doing stand up for a while, try 11 years, was kind all over the place. Not by much, but just enough that all the judges felt she needed more time to hone in her craft. They did this when she ended up doing what they hated – didn’t make it about herself. She eventually did that. Though what they remember is that she started her jokes off as if she was a single woman. She tried her own take on a slightly played out shtick (single girl drama) and it didn’t work out because two seconds later she admitted to being married.

Keenan had said it felt like she wasn’t telling the truth and Rosie felt it was too stiff. A problem that can crop up when a set is a little bit too rehearsed.

Not to say that there’s anything wrong with having a unique take. Everyone has shtick and that’s why Randy has his puns. He deliberately dressed like a lumberjack and then asked why everyone kept confusing him with a lumberjack. Therefore he made the flannel and beard thing work for him. Also it didn’t hurt that he could pull off a sex joke. He started that one by telling the crowd his penis lost a job and then asked if they had any openings to just let him know. So you see, sarcastic and slightly perverted was what helped make him interesting.

For Chloe, it was her background. She was a black girl that grew up in a predominantly Jewish area. But, and this is where she went wrong, she barely touched on that subject. She was funny using other source material when as Keenan pointed out she could have been funnier by using her own life. It’s like she walked past a gold mine.

Then there was Zainab. Zainab was tall, beautiful, and yet none of things distracted away from her talent. If you can recall – last week Keenan told another woman to tone down on dressing sexy because he couldn’t really hear her material over the loudness of her short dress. So Zainab was simply that good that it didn’t matter what she was wearing. Everything about her just worked.

Rocky, practically a veteran of this field, still received criticism from the judges even though they loved him. It’s just that they thought he could make up the pace some more. He gave the audience too much time to breathe.

There was plenty of talent during this third week of Invitationals and only seven could be picked for the semi-finals. It was a tough decision by the judges, but in the end they went with Chloe, Alingon, Zainab, DC, Emily, Rocky, and Gerald. Emily and Gerald were shown from tiny glimpses of montages though the little time I got to see them – I personally found them to be funny.

What do you think? Did the judges make the right choices?