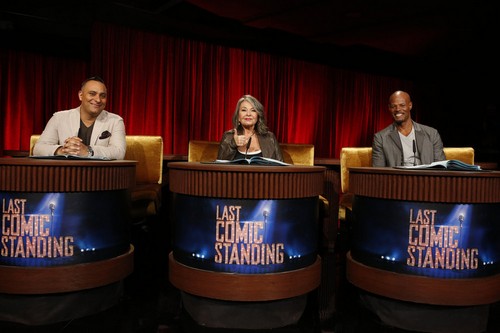 Tonight on NBC The Last Comic Standing is back with the third episode in its eighth season. On tonight’s episode the auditions conclude. The judges will then decide which comics will advance to the semi-final round.

On tonight’s episode it’s the final round of the invitationals, in which the top comics across the country deliver their funniest sets for judges Roseanne Barr, Keenen Ivory Wayans and Russell Peters. Then the judges make the difficult decision of which comedians will take the remaining spots left to become semi-finalists, and be one step closer to being the Last Comic Standing.

Last Comic is back for its 4th week of invitationals and isn’t it funny that the undoubtedly star of CBS’s The Millers, and our host JD Smoove, introduced Carlos Miller as the first Act – I smell conspiracy! But if that was in fact what happened then, even I have to say it, good choice. Carlos walked on that stage and owned it straightaway.

He brought humor and vitality to his set. One judge called it awesome another called it non-stop funny. And yet his set brought old familiar feelings and only Keenan pointed that out. He told Carlos that he reminded him of Martin. Martin Lawrence is a great comedian and to be compared to him should be considered an asset, though does anyone really wants to be considered a sequel? It’s a well-known fact that the original is always better.

Then there was Joe Zimmerman. He had a sarcastic wit about him and it showed all throughout his dialogue. Admittedly he drifted away from the mike a few times and that made it hard to hear him but both the crowd and judges loved him. Rosie called him likable and unique. So already he has a one up on the only other contestant that went before him!

Still, you have to keep you act tight. And the judges didn’t feel like Tim brought his best to the invitationals. That made them question whether or not he held back thinking he could pull out his grade A material for the semi-finals. By the way he’s going he might not even end up going to finals so what a waste.

Where Tim failed to give his best, others remembered thankfully what’s on the line here. Because, truly, a quarter of a million dollars doesn’t just fall out of the sky for anyone! All these people have to do is be funny.

That’s why Yamenika came up to the stage prepared to use her entire body to get her audience to crack up. She did this while showing her vulnerability. She’s not a skinny girl and it’s great that she found a way to be happy with herself and make you accept her as well.

As for Monroe who was so good I’m even going to give his full name, Monroe Martin, he took personal tragedies from his childhood and made then relatable.

Monroe was a foster kid and his mom was a thief it seems and his father spent most of his life in jail. So either he stayed home crying about it or fall back on the age old tradition of turning pain into laughter. And everyone was glad he chose the latter option. It takes a lot to get praise from Keenan and he said Monroe was what comedy should be.

Even that girl that became known for her catch phrase added something extra. Aand Deanne was only talking about her “balls” – so you know the standards weren’t that high!

Last Comic Standing is all about innovation and certain stars just don’t have it. Don’t get me wrong some of them are without a doubt talented and that’s why they were accepted into the Semi-finals to begin with, but if your act only serves to remind people of even more talented and guaranteed stars then did you really deserve to move along.

Miller, Nikki, and Mike were just three of the comedians that moved on yet they were called Martin, Bernie, and Mike came close to another legend (of whom I never heard of and can’t recall the name). So are they being accepted for what they can put out or will the judges start demanding the same kind of performance they expect from the greats?

Find out on an all new episode next week!