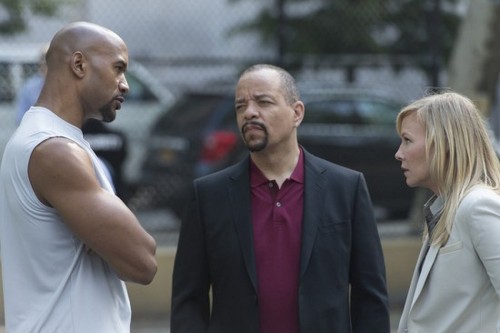 Tonight on NBC Emmy Award-winning producer Dick Wolf’s crime drama, Law & Order: SVU returns with an all new Wednesday October 1, season 16 episode 2 called, “American Disgrace.” On tonight’s episode, a pro basketball player is accused of rape, and then other alleged victims come forward, but Benson and Carisi clash over whether the women’s stories are all valid. Meanwhile, the investigation results in Rollins visiting her old precinct in Atlanta, which stirs up memories for her.

On the last episode, in the season 16 premiere, Sergeant Benson (Hargitay) juggled work and her new role as foster mother to baby Noah Porter. Amaro (Pino), now working the traffic beat in Queens, arrested an underage prostitute with connections to Noah’s mother Ellie, who was “greenlit” by her pimp and brutally murdered. Amaro’s undercover work set off a chain of events that putseveryone connected to the case – even baby Noah – in danger. Meanwhile, a new detective assigned to Manhattan SVU (guest star Peter Scanavino) started off on the wrong foot. Did you watch the last episode? If you missed it, we have a full and detailed recap right here for you.

Tonight’s season 16 episode 2 episode looks like it is going to be great and you won’t want to miss it, so be sure to tune in for our live coverage of NBC’s Law & Order: SVU at 9:00 PM EST! While you wait for our recap hit the comments and let us know how excited you are about the new season?

RECAP: Tonight’s episode of Law & Order SVU begins with a press conference for NBA player Shakir “The Shark” Wilkins. The team owner announces that Shakir’s contract has been renewed. After the press conference Shakir’s driver can’t be found, so the owner nominates his assistant Carla to take Shakir out of the building. In the elevator Shakir grabs Carla’s arm, and she freaks out on him and begins screaming and hitting him. When the elevator doors open all of the reporters capture the scene, and Carla screams in to the cameras that Shakir rapes her.

After seeing the video of Carla on the news, Olivia brings Carla in for questioning. She reveals that Shakir raped her on Memorial Day in The Hamptons. She says that he drove her back to the city, and he got her drunk at the hotel bar. She blacked out and woke up in his bed the next day sore. She told her boss Mr. Bower that Shakir raped her, and he told her it was a misunderstanding and has been paying her bonuses to keep her quiet.

Back at the station, Tortuolo and Rollins tell Olivia that they think Carla is faking it because she waited three months to come forward, and decided to do so in front of the entire press. Olivia isn’t buying it, she thinks that Carla is telling the truth. She sends Rollins to her old office in Atlanta, where another woman has come forward and says Shakir raped her. Rollins heads to Atlanta and sits down with the second victim. Marcy says that she was styling Shakir for a photo shoot and he invited her to his hotel room for wine, she blacked out and woke up naked. She says she told Mr. Bower and he told her not to say anything and paid her $5,000.

Shakir comes down to the police station with his lawyer for questioning. He insists that he had sex with Tiana, and it was consensual, it was her idea. He had sex with Macy and Carla too, but insists it wasn’t rape. He says he lied at first because he is in the middle of a divorce and if his wife found out that he was sleeping around he will crucify her in court.

Totuolo video-chats with Macy in Atlanta and reveals to her that she has to testify against Shakir, she is shaken and doesn’t want to have to do it. Carla learns that she has to testify too, unless she has some sort of evidence to prove that he raped her. Carla takes matters in to her own hands and meets with Shakir and he apologizes for hurting her and warns her that if she takes the stand all of her dirty laundry will be aired as well. Carla records the entire conversation and hands it over to the police, and they arrest Shakir for the rape. While they are handcuffing him he screams that he is not a rapist. Mr. Bower holds a press conference and announces that Shakir is no longer a part of his team.

Shakir heads to court, and Mr. Bower takes the stand, he confesses that he paid off the victims because he thought they were false claims, when he seen how upset that Carla was in the elevator he knew they were true. Carla takes the stand and describes what she remembers of the night that Shakir raped her in his hotel room. Macy follows her and tells her a similar story.

Rollins is working with Tiana to practice what she will say in court tomorrow, Tiana won’t cooperate and begins complaining that Mr. Bower didn’t pay her half as much as he paid Carla and Macy. She heard on the news that they got $5000 and she only got $2500. She reveals that Orion Bay told her to lie and say Shakir raped her, that’s what the girls were getting paid for. Rollins is confused, why Bower would set up his own player. Barba goes to the judge and gets a 48 hour continuance to try and sort out his witnesses and see if Macy and Carla are lying.

They bring Macy and Carla in for questioning and after hours of drilling them, they insist that Shakir raped them and they aren’t lying. Rollins and Barba visit Mr. Bower and his daughter Cordelia, Mr. Bower shocks them and has a temper tantrum and starts comparing the black girl to the white girls and then snaps on Cordelia his daughter and says that “she is blind but he has forgiven her.” Tortuolo visits Shakir and asks him if he can think of any reason Mr. Bower would want to take down his own player.

Later that night Cordelia pays her dad Bower a visit, and asks him if he set this entire thing up. She demands to know why he is framing Shakir. Bower confesses that he had Shakir followed and he found out that she was having sex with him and is pregnant with his baby. He says Cordelia is a “whore,” and she can’t have a “little black baby.” Little does Bower know, Cordelia is secretly taping the entire conversation.

They head to court and have all of the rape charges against Shakir dismissed. They promised Cordelia they wouldn’t use the tape to convict her father of charges, so Bower gets away with everything he did. Shakir storms out of court and Cordelia tries to talk to him, he doesn’t want to hear it, he yells that his name is ruined and he lost his contract. He apologizes for sleeping with other women and begs Cordelia to forgive him and let him raise their baby with her. Cordelia reveals that it is too late, and she got rid of the baby after the witnesses came forward and said he was a rapist.