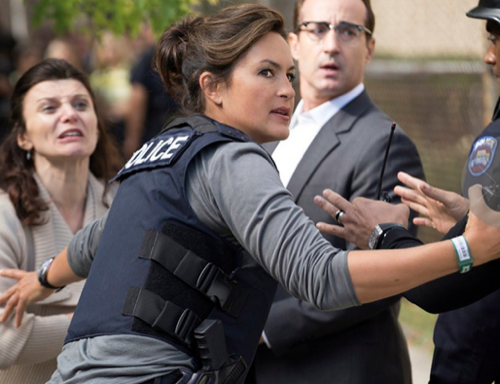 On the last episode, Amaro (Danny Pino) reported to the scene of a car crash where Hollywood starlet Tensley Evans (guest star Stevie Lynn Jones) tried to flirt her way out of an arrest. Amaro’s by-the-book handling of the situation got him back on the SVU squad, just in time to investigate Tensley’s latest offense – the statutory rape of a 15 year-old boy. But Benson (Mariska Hargitay) suspected that underlying issues may have led to Tensley’s downward spiral – was the victimizer also a victim? Did you watch the last episode? If you missed it, we have a full and detailed recap right here for you.

On tonight’s episode New York City bike messenger Holden March (guest star John Karna) creates a video diary of his troubles with women. Talk soon escalates to action, and the SVU scrambles to find his manifesto before he commits another violent act. When Rollins (Kelli Giddish) and Amaro (Danny Pino) come face to face with Holden, they find out just how dangerous a desperate man can be. Meanwhile, as Benson (Mariska Hargitay) balances the responsibilities of motherhood and career, the new Deputy Chief of SVU (guest star Peter Gallagher) calls her leadership into question. Also starring Ice-T (Detective Odafin Tutuola).

Tonight’s season 16 episode 4 looks like it is going to be great and you won’t want to miss it, so be sure to tune in for our live coverage of NBC’s Law & Order: SVU at 9:00 PM EST!

Tonight’s episode of Law & Order SVU kicks off with a creepy teen boy in a park making a video diary about how alone he is, and why he doesn’t understand that no girl will go out with him. He has so much to offer girls, but they always go out with jerks.

Olivia is in the hospital with Noah, his fever has finally started to go down. Noah’s babysitter Lucy arrives and tells Olivia that the police station is looking for her, she offers to stay with Noah. Olivia rushes to Central Park where a woman is being loaded in to a stretcher, she’s been stabbed repeatedly and a male in his early 2o’s attempted to rape her. Rollins spoke to the victim before she was loaded in to the ambulance and she said that her attacker counted out loud each time that he stabbed her. Meanwhile, the creepy guy with the video camera is standing next to the ambulance recording himself, he says no one ever notices him. But soon, everyone will know who he is.

Olivia heads to the hospital to interview Gwen, the woman that was attacked in the park. She says that her attacker came out of nowhere and put a knife to her neck. He pushed her in to the bushes and groped her, but he didn’t rape her. She says he didn’t seem to know what he was doing and she told him to get off from her, then he stabbed her 11 times. She reveals that he called her “GG,” which is a name that her friends called her in middle school. But, she had never seen him before and says that he didn’t go to school with her.

Back at the police station they receive another phone call, another woman was attacked by a man. He tried to rape her and she screamed, then he started stabbing her. He counted out loud too and stabbed her fifteen times. He called her by her name Haley, and ranted about her dating black guys. But, she says she hasn’t dated a black guy since high-school. Haley and Gwen don’t know each other though, so they didn’t go to the same school.

Once they release the sketch to the public of the attacker, several women come forward claiming they were attacked too. One woman says that her attacker pulled a knife on her, but he got scared off. He did call her by the name “JL” on her badge at a restaurant where she worked two years ago.

Meanwhile, the creepy video diary guy, Holden is banging on his neighbor’s door because she is having sex loudly. She opens the door and he is holding a steak knife in his hand, he rants that women don’t want him but they want gross “sweaty brutes.”

Olivia heads back to the hospital to check on Noah, the doctor reveals to her that Noah was abused and suffered severe lung damage the first few months of his life, before he was taken in to foster care. She tells Olivia they are going to have to run more tests and x-rays to see if there is any more damage.

Rollins and Nick head to the restaurant where JL used to work. The manager reveals that there was a busboy who was a little strange when she worked for him. He had OCD, but he had to fire him because on Valentine’s Day a couple was making out in a booth at the restaurant and he poured ice water on them. His name was Holden March.
Rollins and Nick head to Holden’s parent’s house and they reveal that he is on medication and is supposed to be going to therapy.

They get Holden’s address and a list of all of the schools and camps that he went to. Nick and Olivia find Holden coming out of his house and try to talk to him, he pulls out his video camera and starts recording and saying the NYPD is violating his rights, a crowd forms around him and Olivia and Nick decide to leave before it gets out of hand. Olivia radios in and says she wants 24 hour surveillance on him.

Back at the police station all of Hlden’s victims are shown childhood pictures of him and they suddenly remember him. He’s been stabbing them whatever number of times based on how old they were when they shot him down and wouldn’t go out with him. Olivia tells them to get a warrant ASAP, the surveillance team says that Holden never came home after his run-in with Olivia and Nick. They find his next-door neighbor and her boyfriend both stabbed to death. And, a book he wrote of all the women that had wronged him so far in his life. Nick discovers that wherever he went he took two brand new guns with him and loads of empty ammo boxes.

They head back to the police station and begin dismissing units out to addresses where they think he will pop up next. There were over two dozen names of women on the list that he could try to kill next. While Olivia is sending out units and getting suited up in her bulletproof vest, she receives a phone call from Noah’s caseworker who demands to know why her foster child is laying in the hospital and she went to work. She reassures her that she is trying to get back to the hospital ASAP.

Holden’s parents arrive and they show them his hit-list. They go over the list of names and Holden’s mom tries to ID some of them and figure out where they live. His mom pleads with them not to hurt Holden when they catch him.

Nick and Rollins begin tracking down some of the people on the list. They visit Nick’s old middle school English teacher, she reveals that Nick was devastated when she got married. Her husband is a teacher too. They head to her husband’s classroom and find that he is dead, Holden is holding four of his students hostage.

Outside Olivia has snipers lined up at the windows. Inside Amanda is trying to talk to Holden and build a rapport with him, she tells him that she thinks he is special and she doesn’t understand why girls don’t like him. She reassures him that women would like him, she says she has to tell him some private things, not in front of the kids. Amanda asks if she can kiss him and gets him to put the gun down because he has never kissed a girl, just as she is about to kiss him, one of the police officers on the roof takes his shot and shoots Holden in the head, blood splatters all over Amanda’s face. As soon as Holden is taken down, Olivia rushes to the hospital to check on Niah, who is up and awake and making a full recovery.