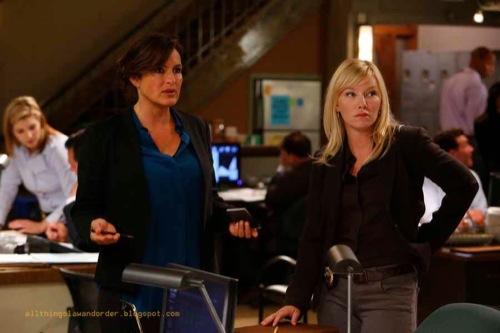 Tonight on NBC Emmy Award-winning producer Dick Wolf’s crime drama, Law & Order: SVU continues with an all new Wednesday October 8, season 16 episode 3 called, “Producers Backend.” On tonight’s episode, a starlet tries to use her charms to get out of an arrest, but Amaro proves unflappable, earning him a spot back on the SVU squad. The same starlet is later charged with statutory rape, prompting a curious Benson to investigate the actress’s own past.

On the last episode, basketball superstar Shakir “The Shark” Wilkins (guest star Henry Simmons) announced his partnership with the Orion Bay clothing line, owned by billionaire Orion Bauer (guest star Stacy Keach) and his daughter Cordelia (guest star Teri Polo). But the SVU intervened when Orion pressed rep Carla Cannon (guest star Kelley Missal) told reporters she was raped by Wilkins. When more women came forward, Benson (Mariska Hargitay) and Detective Carisi (guest star Peter Scanavino) disagreed on the authenticity of each woman’s story, and Barba (Raul Esparza) took a shaky case to court. Meanwhile, the case took Rollins (Kelli Giddish) to her former precinct in Atlanta, where ex-colleagues brought up old memories. Did you watch the last episode? If you missed it, we have a full and detailed recap right here for you.

On tonight’s episode Amaro (Danny Pino) reports to the scene of a car crash where Hollywood starlet Tensley Evans (guest star Stevie Lynn Jones) tries to flirt her way out of an arrest. Amaro’s by-the-book handling of the situation gets him back on the SVU squad, just in time to investigate Tensley’s latest offense – the statutory rape of a 15 year-old boy. But Benson (Mariska Hargitay) suspects that underlying issues may have led to Tensley’s downward spiral – is the victimizer also a victim?

Tonight’s season 16 episode 3 episode looks like it is going to be great and you won’t want to miss it, so be sure to tune in for our live coverage of NBC’s Law & Order: SVU at 9:00 PM EST! While you wait for our recap hit the comments and let us know how excited you are about the new season?

Tonight’s episode of Law & Order SVU begins with Nick patrolling at night, they find two women fighting in the middle of the street, and learn that they have been in a car accident and collided with each other. Nick asks one of the women for her ID, she can’t believe that he doesn’t recognize her, she’s a celebrity named Tensley Evans. She hops in her car and speeds off and Nick has to chase her, luckily there is a road block so he is able to catch her. She flirts with him the entire time he is arresting her and offers to have sex with him and his boss if he lets her go. The next morning Tensley is brought in to court to be charged for another DUI, she lied to the judge and says that the reason she fled the scene was because Nick was inappropriate with her and offered to let her go if she had sex with him.

At the police station Olivia reassures Nick that he isn’t in trouble, they viewed the dashboard camera and know that he didn’t assault her or do anything inappropriate. In the interrogation room, Rollins questions Tensley and demands to know why she ran away from rehab, it was court-appointed and she wasn’t allowed to leave. Tensley cries to Rollins and her lawyer that the psych director Jim Durant at rehab sexually assaulted her. Since she was allegedly assaulted at rehab, the judge orders the police to cut her loose and let her go home.

Olivia pays Tucker a visit at internal affairs and wants to know how much longer Nick will be on patrol, she needs him back, they are short-staffed. She shows Tucker the video footage of Nick arresting Tensley, to reassure him that Tensley was lying about him assaulting her.

Rollins heads to rehab and meets with Jim Durant. He reassures her he had no inappropriate relationship with Tensley. He does reveal that there was an issue with Tensley, they caught her having sex with a fifteen year old boy that was visiting his mother.

Olivia has Nick over and reveals to him that she talked to Tucker and he is back on the job, first thing tomorrow she wants him to go talk to the fifteen year old boy that had sex with Tensley. The next day Olivia and Rollins pay Tensley a visit and she confesses to having sex with the minor, she insists that she was doing him a favor and now he will be the most popular kid in school. Olivia handcuffs her and arrests her for having sex with a minor.

Tensley and her lawyer head back to court, the judge agrees to let her undergo a psych evaluation before charging her for having sex with a minor. Olivia thinks that Tensley might have been abused when she was younger, and that is why she thinks it is okay to have sex with minors. Tensley sits down with Rollins and her lawyer in Olivia’s office and explains that she slept with her producer Adam Brubek and all of his friends from the time she was 13-16 to get big roles in his movies. Her mother knew about it and let it go on, she even got her birth control.

Rollins and Nick head to Adam Brubek’s casting party, they tell the officers with them to start checking all the kids in the pool’s IDs. They find Brubek, he informs them that his production company had to cut all ties to Tensley because she was difficult to deal with and always showing up late and drunk, and no one would insure her. He insists that he was never alone with Tensley, and tells them to watch their back with her because she is a “waste case.”

Nick heads out to talk to Brody, another actor that used to party at Adam Brobek’s and he was Tensley’s fiancé. He says that at one of Brobek’s parties, a fifteen year old girl named Amber drowned and died and she was like a sister to Tensley. Olivia and Rollins head over to Tensley’s to talk to her about Amber’s death. Tensley cries that she doesn’t want to talk about it and runs in to the bathroom and locks the door. Olivia kicks the bathroom door in and finds Tensley slitting her wrists.

Tensley is sent back to rehab, a few days later Olivia pays her a visit Tensley confesses that the night Amber died her and Adam Brobek were in the pool with her. Adam was taking turns holding them underwater and having sex with them Tensley went in the house and left Amber out in the pool, and when she came back outside Amber was dead. Tensley says that Brody was there that night too, but he was in the house with Brobek’s lawyer Dennis, they were having a secret gay affair.

Olivia finds one audition tape for a 16 year old in Canada named Maude, but the movie was never made. Olivia sends Nick and Rollins to Canada to talk to Maude. They track down Maude and she reveals that she met Adam on Twitter and he came to see her and said they are filming a movie in Canada. He came to Canada to audition her and didn’t even have a script, she was only 16 at the time and he convinces her to have sex with him over and over in his hotel room to give her some “real life experience.”

Olivia and Rollins bring Adam Brobek in for questioning and he confesses that he had sex with Maude in Canada but it wasn’t illegal because she was 16. What he doesn’t realize is that it is illegal to travel to a foreign country with the intention of having sex with someone under the age of 18. And, since there was never any move made in Canada, that means the only reason he went there was to have sex with Maude. Federal agents swarm in and arrest Adam Brobek.

Later that day Nick and Rollins are watching Tensley on Good Morning America talking about her “horrible abuse” she endured from Adam Brobek and how it has made her a stronger person. Olivia runs through the office and tells Rollins that she is in charge, she just got a phone call and her son Noah is in the emergency room.