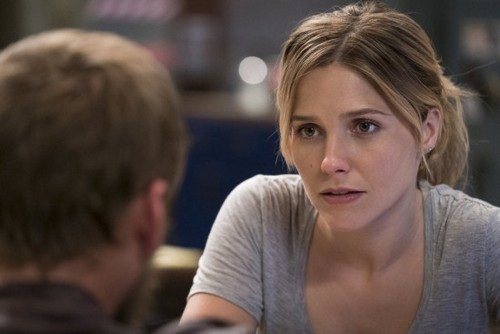 Tonight on NBC Emmy Award-winning producer Dick Wolf’s crime drama, Law & Order: SVU continues with an all new Wednesday November 12, season 16 episode 7 called, “Chicago Crossover.” On tonight’s episode, Police from Chicago work with the squad to track a child-pornography victim, and together they follow a lead about a live-streamed pornography club. However, the case risks being derailed when tension erupts between Benson [Mariska Hargitay] and the visiting sergeant.

On tonight’s episode as per the NBC synopsis, “THE CHICAGO P.D. JOINS FORCES WITH MANHATTAN SVU TO UNCOVER THE ROOTS OF A CHILD PORNOGRAPHY SITE. GUEST STARRING “CHICAGO P.D.” STARS JASON BEGHE, SOPHIA BUSH AND JESSE LEE SOFFER Sergeant Hank Voight (Beghe) and Detectives Erin Lindsay (Bush) and Jay Halstead (Soffer) track a child pornography victim to his last-known whereabouts in New York City, where Sergeant Benson (Mariska Hargitay) and the SVU squad get a new lead – evidence of a livestreamed pornography “club” that caters to its subscriber’s shocking requests. When Lindsay discovers someone from her past is involved, she hopes it will help lead them to the site’s ringleader, but tensions between Voight and Benson could threaten the case. Also starring Ice-T (Detective Odafin Tutuola), Danny Pino (Detective Nick Amaro) and Kelli Giddish (Detective Amanda Rollins).”

Tonight’s season 16 episode 7 looks like it is going to be great and you won’t want to miss it, so be sure to tune in for our live coverage of NBC’s Law & Order: SVU at 9:00 PM EST!

Tonight’s episode of Law & Order SVU kicks off with Olivia and Nick at the park with Olivia’s baby Noah, she receives a phone call from Hank who gives her a heads up that Erin and Hallstead are headed to NYC to help her out on the child pornography case.

Jay and Erin arrive at SVU and Erin reveals that her brother Teddy is one of the kids in the photos.  They explain to Erin that they have found more pictures of her brother and they are linked to a chil pornography ring that streams videos live online.  The ring refers to themselves online as the “Chess And Checkers Club.”  Users pay via encrypted links and so far the feds haven’t been able to shut down the operation.  Erin, Jay, and the SVU team get to work running the photos they found in the Chicago fire through the database trying to ID some of the kids.

They finally get a break and find a juvenile record for a seventeen year old who goes by the name “Teddy Voight” and was picked up for solicitation.  They head to the last center he ran away to, the woman on duty remembers Teddy and says he was friends with a girl from the center named Jocelyn.  Rollins and Jay head to a local high-school and track down Jocelyn.  She says the last she heard of Teddy he was still “working the piers,” in West Village.

Once night falls, Rollins and Jay and Nick and the rest of the team hit the piers with photos of Teddy.  They find him strung out and making out with a guy, and they bring him back to the station in his high-heels.  Erin approaches him and says “Hi Teddy,”  and he stares at her long and hard and says “I’m not Teddy anymore.”

Teddy is less than helpful, and he has no interest in helping their investigation.  Teddy obviously blames Erin for not looking for him soon or helping him when their mother abandoned them.  He heads to a holding cell and Olivia pays him a visit and tries to reason with him.  She reveals that she saw the photos and knows what happened to him when he was young.  He thanks her for the blanket she brought him and goes to bed, refusing to answer any of her questions.

Since Teddy isn’t talking, Nick and Rollins pay his friend Jocelyn a visit again.  They explain to her that when he was 13 he was the victim of a sex trafficking ring, Jocelyn freaks out and runs out of the café.  They head back to the police station and decide to look for Jocelyn in the old Chess and Checkers Club videos and pictures.  They find a video of her being handcuffed and raped when she was about 13, they realize that the man raping her is actually Teddy.

They show Teddy the pictures of him and Jocelyn and he just laughs that it was “another day at the office.”  Erin finally gets through to Teddy and he screams that Jocelyn was her friend, he had sex with her on video because he knew that if he didn’t they would send in somebody bigger, older, and rougher.  Teddy cries that he doesn’t remember where he was or who he was having sex with because he was young and high.  He reveals that the person that introduced him to the sex trafficking ring was George, a security guard at the youth center.

Olivia and her team head to the youth center to track down George.  The woman in charge confirms he still works there and says that he was spending a lot of time with a boy named Henry – the same boy who is currently being streamed live on the Chess and Checkers website.  When George sees the police he tries to make a run for it, and they chase him out in to the street.  Erin collides with a bicyclist and falls hard on the pavement, cracking open the back of her head.  Someone else tackles George and cuffs him while they tend to Erin’s wounds.

Olivia heads back to her office and Hank is waiting for her – he says that he is sending Erin back to Chicago.  Olivia shows Hank the video of Henry online and he is disgusted, the commentator says that there will be a special show starring Henry later that night.  Rollins and Nick sit down with George and question him about where he took Henry.  Hank storms in to the interrogation room and starts roughing up George, Olivia follows him and yells at him to get out.  She lectures him and tells him that they don’t do business like that in NYC, he’s not in Chicago anymore and he needs to follow her rules.

Hank and Olivia head back in to the interrogation room and try again with George.  He confesses that he sold Henry to a guy for $1000, and the guy picked him up in a gray SUV and wherever he took Henry he had to pay two tolls to get there.  They show Teddy pictures of the room where Henry is being held, but he says that he doesn’t remember.

Olivia and Hank decide to go undercover.  They find Jocelyn and lie to her and cry and tell her that they are Henry’s parents.  They beg Jocelyn to help them find out where they are keeping Henry.  They convince Jocelyn to come back to the police station with them and they throw her in to a room with Teddy.  She’s not happy to see him, but he pleads with her to stay and says that he used to call her “Mouse” and he shared food with her.  She screams that they were friends, and wants to know why he raped her.  He tries to explain that it was better that it was him, and not somebody else and breaks down crying.

Jocelyn looks at the video of Henry, and she confirms that she has been to that room.  She remembers riding across a long bridge to get there, they realize that the building where they are holding him must me in Staten Island.  Jocelyn recognizes the voice and says his name is Bob, and Teddy swears his last name is Clinton.

They start cross-referencing Bob Clinton with gray SUV’s in New York, meanwhile on live video Henry is being chained down to the bed and is about to be raped.  Rollins and Jay watch the video in horror, and then Olivia and Hank rush in to the video and take down the guy tying up Henry.  Outside Nick and other officers take down a few more guys that ran out of the building.

When Olivia and Hank return to the police station with Clinton, Rollins tells them that they “have a problem.”  She shows them the Chess and Checkers website and there is a picture of an 11 year old girl named Gabriela – and it says they are still in business.  They may have taken down Clinton, but the Chess and Checkers Club is still going strong.
Olivia and Hank head in to the interrogation room and demand to know who he is working for.  He tells them he will tell them everything he knows for full immunity, and Hank laughs it off.  Olivia says they will think about it, and says he is going to a cell to think about his next move.

The next morning Olivia receives a phone call, somebody murdered Bill Clinton in the middle of the night.  They have the inmate that killed him, someone named Lester Davis.  They pull the jail’s phone records and realize that Lester received a phone call giving him the order from a burner phone.  Hank receives a phone call from Lindsey and learns that Andrew, the fire victim who originally had the child pornography pictures and the cop moving him were both shot to death and killed.  Olivia realizes that the leader of the organization must be in Chicago – Hank tells Erin he is coming home.