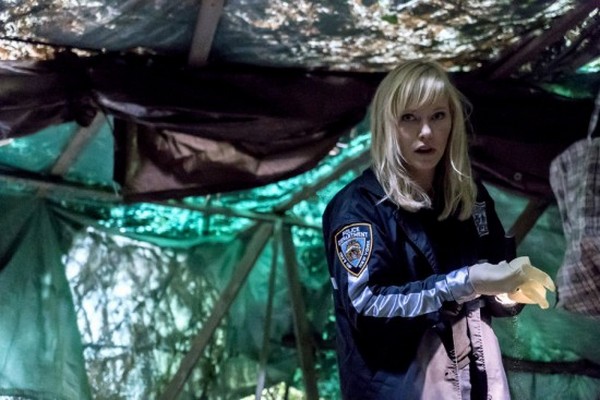 Tonight on NBC Emmy Award-winning producer Dick Wolf’s crime drama, Law & Order: SVU continues with an all new Wednesday November 5, season 16 episode 6 called, “Glasgowman’s Wrath.” On tonight’s episode, three girls enter the woods, and two of them vanish while the third gets injured during their quest to find the mythical Glasgowman. As the search for the suspect gets underway, Benson [Mariska Hargitay] attempts to separate stories of fantasy from reality.

Tonight’s season 16 episode 6 looks like it is going to be great and you won’t want to miss it, so be sure to tune in for our live coverage of NBC’s Law & Order: SVU at 9:00 PM EST!

Tonight’s episode of Law & Order SVU begins at a sleepover with teen girls, they sneak out at night with a video camera ad head to Inwood Hills Park to find something called “Glasco Man.”  While they are running through the park in the dark with their flashlights they hear a noise and think it is Glasco Man.  They star panicking and running and one of the girls is grabbed by him and disappears from the screen of their video camera.

The next morning the SVU team heads to the park to where Zoey’s body has been located.  A woman reveals that she saw a huge man lurking over the girl’s body, and she even took photographs of him.  You can’t see his face in the pictures but he is wearing a trench coat and looks like Big Foot.   Zoey is rushed to the hospital and they manage to stabilize her despite her stab wound – they are waiting for parent’s permission to do a rape kit.

Two women arrive at the hospital frantic, they say they are Zoey’s mom and her sister Mia is missing.  They were supposed to be at a sleepover at their friend Perry’s house.  They have called Perry’s house over and over but no one is answering.  Rollins and Nick decide to call Olivia and let her know what is going on, even though it is her day off.
They head to Perry’s house where her mom Barbara has no idea her daughter is even missing.  They find Perry, Mia, and Zoey’s cell phones hidden in her hamster’s cage.  Barbara has no idea where Perry is – she thought she was sleeping at Mia and Zoey’s house.

Olivia arrives at the precinct and is annoyed that Nick waited so long to call her in.  Zoey wakes up at the hospital, and Olivia and Nick pay her a visit to find out what happened last night.  She says that Mia and Perry convinced her to go to the park at night with them because it was the night after Halloween and the spirits were still out.  Zoey says that someone caught her and knocked her down, it was the “Glasco Man.”  He is six feet tall, bald, has an eye patch.  Hundreds of search and rescue officers hit the park to search the woods with dogs to search for the girls.  Deep in the woods they find one of the girls’ backpacks and they find the Glasco Man hiding in a cave.  After he goes crazy they taiser him and manage to bring him down and cuff him.

They bring Glasco Man in for questioning and learns that his name is Charlie, and he is homeless and off from his meds – he has been off the grid since he stabbed a man three years ago.  They have no evidence though, the rape kit came in negative, and they can’t find the knife.

Charlie is off his rocker, and thinks that he has been on the police’s watch list for years because he hears voices in his head.  He doesn’t think that the fact that he stabbed a man should define him.  He starts rambling that he saw a missile go down in the Hudson River, and they are trying to erase his memory with the lasers on their cell phones.  They  show him pictures of Zoey, Mia, and Perry and he insists he has never seen them before.  They show him a picture of himself holding Zoey in the park, he swears he didn’t hurt her and he was trying to save her.  Charlie says that he found the camera in the park and he hid it inside his dwelling.  He agrees to take them to the camera to prove that he didn’t hurt the girls.

Charlie heads to the park and shows them where he lives and gives them the video camera that the girl dropped.   After some convincing they get Charlie to go back to the precinct and Amanda stays behind to go through Charlie’s make-shift house.  She finds three bloody knives in a trash bag, they take them back to the precinct and Charlie insists that he just uses it for hunting and fishing.

They send the girls’ camera to the lab to and get the girls’ video footage off from it.  Olivia and her team gather around the computer and watch the video.  They hear the girls talking about a place called Gateway and Glasco Man.  They head back to the hospital to talk to Zoey, she says that they had a map to Glasco’s mansion where all of the kids go to live.  Zoey reveals they got the map from a guy named Leslie that was babysitting Perry.

Rollins and Olivia head to Leslie’s house and he insists that Glasco Man isn’t real, he made up the entire story and was turning it in to a comic book.  They demand to know where the map is – it’s painted on his wall.  He says that the map will lead them up the river to another park where Charlie likes ot hide out.

Olivia and her team head to the abandoned building that was supposedly Glasco Man’s mansion and they find a knife and a dead cat.  They find both girls tied up and stabbed in the abandoned building and barely alive.  Perry tells them that Glasco Man stabbed them and said he was coming back to “bleed the devil out of them” but he never returned.
They fix Mia up at the hospital and she reveals that Glasco Man was stabbing Zoey and she yelled at him to leave her alone.  She says that Glasco Man showed them his knife and told them to come with him to the Gate House of else he would kill them.  Perry insists that she was attacked last night, but the doctor insists it was just an hour ago.

Their timeline was way off, they swear Charlie attacked them – but he was in custody when they were stabbed.  Olivia thinks that Perry and Mia are covering for someone, and are living in their own fantasy world.

Olivia and Rollins head back to the hospital to question Zoey again, she confesses that sometimes Perry and Mia hurt her when she tries to hang out with them.  And, one time Perry attacked her and pushed her down and Mia stepped on her hand.

After talking to the doctor, they determine that Perry’s wounds were self-inflicted, and their DNA was on the knife that stabbed Zoey.  So, Perry stabbed Mia and tied her up and then stabbed herself – after she stabbed Zoey.

They bring Mia in for questioning and she says that the whole idea was Perry’s and when they were in the park Perry tripped Zoey and stabbed her and then covered her up with leaves.  Then Perry took Mia to the abandoned house and tied her up and stabbed her.  Perry insists that Glasco Man came to her at night and told her that her mission was to take an innocent’s blood or else she would lose her breath.  Perry says that the cat at the abandoned house tried to hypnotize her with his eyes so she stabbed him in the heart.

They all head to court to see if Perry is component enough to stand trial – the judge rules that Mia is a victim in the matter and is not to be held responsible for what happened to Zoey. The judge rules that Perry is to be sent to a psychiatric center until they determine she is no longer a danger to herself or anyone else. But at the end Perry and Mia in the elevator join hands as if to pinky swear! Implying that they lied and tricked the court! As one fan remarked in the comments: For those old enough to remember LA Law, an episode of that program ended in a very similar way: a hand contact in the elevator between 2 suspects raises the suspicion that they were in cahoots to avoid a more serious punishment. I wonder if this episode of SVU intentionally copied that ending.