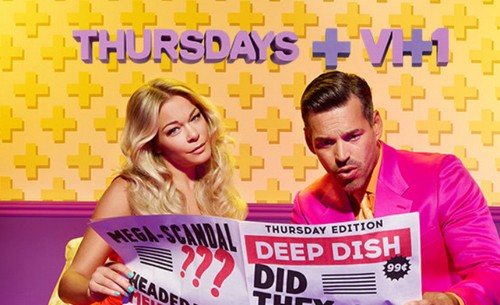 For those of you not familiar with the two, LeAnn Rimes exploded onto the country music scene in 1996 at the young age of thirteen with her smash hit Blue, which quickly earned her the distinction of Nashville royalty. After years of personal ups and downs throughout her teens and 20′s she ultimately achieved a celebrated music career that any artist would envy. Recently, however, Rimes career became overshadowed by the scandal surrounding her highly publicized on-set affair with actor, Eddie Cibrian, while both were married to other people. As LeAnn and Eddie got divorced and fell in love, they not only had the tabloids, paparazzi and blogs to contend with but also Eddie’s ex-wife, who took to any media outlet she could find to air dirty laundry. Through it all Eddie and LeAnn got married, and now Eddie shares custody of his two sons.

On the last episode the show was about the daily lives of LeAnn and Eddie, the couple faced tabloid rumors about an expensive divorce; though this was happening Eddie decided to refuse a statement. Did you watch the last episode? If you missed it we have a full and detailed recap, right for you.

On tonight’s episode, LeAnn has a ladies’ weekend with her Southern friends. Meanwhile, Eddie is offered a big TV job, but the gig would keep him away from his family.

Here we go again. This episode of LeAnn and Eddie begins with taking a shot or two at the press. And Brandi, there’s always a shot or three at her. In between insisting that their relationship has been unfairly documented, on tonight’s show Eddie gets a job offer, finally. Apparently he has snagged a role in Dallas, that would film in Dallas for at least 7 months. He has two days to decide whether or not he is going to take it and LeAnn clearly doesn’t want him too. She says that she wants him to be the head of the household but she doesn’t want to be away from him. As Eddie boxes with his friend LeAnn parties with her girlfriends.

LeAnn’s 3 best friends are in town and two of them hassle her about ignoring her southern routes. They convince her to mix up wine tasting with ATV riding. Meanwhile Eddie’s agent has worked out a deal where the show will give him a 3 day weekend once a month and pay for his travel to fly between Dallas and LA. That’s a huge deal for an actor coming on in their first season with the show but Eddie is still thinking it over.

LeAnn heads out to a gay country bar with her friends- the same ones that were bought and paid to appear on this show. Remember a few months ago when we heard that they had to hire actors to be LeAnn’s friends? Anyway, after doing several shots LeAnn gets up and does a karaoke version of one of her songs. She gets home and Eddie tells her that he is turning the job offer down. Tune in next week for more of LeAnn and Eddie.