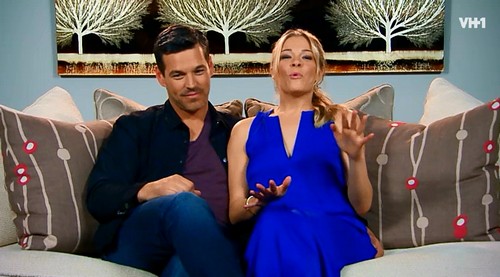 Tonight on VH1 LEANN & EDDIE airs with a premiere episode called, “Grand Ole Dad.” On tonight’s show a trip to Nashville gives LeAnn a chance to make time for her father, and Eddie tries to connect with his father-in-law.

For those of you not familiar with the two, LeAnn Rimes exploded onto the country music scene in 1996 at the young age of thirteen with her smash hit Blue, which quickly earned her the distinction of Nashville royalty. After years of personal ups and downs throughout her teens and 20′s she ultimately achieved a celebrated music career that any artist would envy. Recently, however, Rimes career became overshadowed by the scandal surrounding her highly publicized on-set affair with actor, Eddie Cibrian, while both were married to other people. As LeAnn and Eddie got divorced and fell in love, they not only had the tabloids, paparazzi and blogs to contend with but also Eddie’s ex-wife, who took to any media outlet she could find to air dirty laundry. Through it all Eddie and LeAnn got married, and now Eddie shares custody of his two sons.

On the last episode LeAnn had a ladies’ weekend with her Southern friends. Meanwhile, Eddie was offered a big TV job, but the gig would keep him away from his family. Did you watch the last episode? If you missed it we have a full and detailed recap, right here for you.

On tonight’s episode, LeAnn tries to make time for her father during a trip to Nashville, Tenn.; Eddie tries to bond.

30 minutes of LeAnn & Eddie feels like about 3 hours. On this episode they are visiting Tennessee where LeAnn’s father lives. Eddie refers to the man as intimidating  because he watched him wrangle a steer while smoking a cigarette. LeAnn and Eddie are making spending time with her father a priority on this trip. They have their huge tour bus parked on his ranch which speaks volumes for how they’re really spending their free time . In between a bit of luxury we get to watch LeAnn’s dad teach Eddie how to rope, ride and everything else that cowboys do. Eddie gets a bit cocky because he has rode on a horse before. He gets this one galloping and ends up being thrown off!

Meanwhile LeAnn is rehearsing for her performance at the Grand Old Opry. She says she normally doesn’t rehearse at all unless it’s for something serious like the Opry. When it’s time to actually perform LeAnn sounds very good and she’s thrilled to be there. She says having her dad around causes a bit of anxiety and this was the first time that he has seen her in a long time.

The day after the Opry LeAnn and Eddie finally get to side down and talk to her dad. They are reminiscing and he talks about the first time that “they” played the Opry. Remember when LeAnn sued him for mishandling her finances years ago? Well obviously that’s over because they seem fairly close again. Tune in next time to see what happens when LeAnn tweets the wrong thing on LeAnn & Eddie!