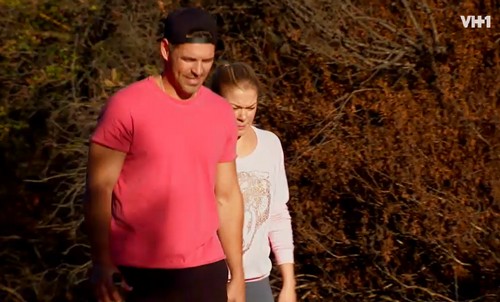 On the last episode LeAnn accidentally tweeted a picture of her butt, which caused a minor PR stir called “Booty Gate” that she tried to defuse. Eddie and LeAnn were clearly not happy about Booty Gate and LeAnn said it was trending. LeAnn’s major concern was her step-kids, because they could Google her and see things. Plus, Eddie found out last minute that his upcoming Menʼs Fitness photo shoot was a bathing suit. Did you watch the last episode? If you missed it we have a full and detailed recap, right here for you.

On tonight’s episode, LeAnn gets baby fever after spending time with her childhood friend and her baby. Meanwhile, Eddie inadvertently goes on a double date with his friend.

LeAnn and Eddie are out for a hike in the canyon. He tells her there are rattlesnakes out there. He goes to pee in the woods and tells her it’s good for the plants. She says she wishes she had a penis to pee when she wants. She says Chrissy is coming in and is on the way with Baby V. He tries to scare her and says it’s a snake and she smacks him. He says he’s just keeping her on her toes.

LeAnn rearranges her schedule because of Chrissy, her childhood friend, and her new baby that are coming for a visit. The doorbell rings and Eddie says the baby is going to kill him. She says she was on the road for years but is now making time for other things like family and he adds and shopping and Twitter feuds. She says she doesn’t get in Twitter feuds and he says she puts them in all caps.

Chrissy and Rendee are there. LeAnn hugs them and grabs the baby. She bounces the baby and smooches her. Eddie asks how much luggage she brought and she says with a baby you need a lot. She says a breastfed baby poops a lot and LeAnn jokes that when she has a big spinach drink each morning bad things come out. Eddie says he knows because he sees it splattered on the back of the toilet bowl. (eww and TMI)

LeAnn says there are other people in the house beside her that have large poops. Terrell tells Eddie he has a haircut appointment and they head out. They go to Pint Salon. Eddie says he thinks his ex would be excited that his new wife loves them like they’re her own but not. The stylist asks if Brandi is dating someone and Eddie asks if he would date her. The guy says no comment.

Eddie says he only communicates with Brandi via email and only about the kids He says he wishes she would get a BF so she’d stop talking shit about him. The stylist shows him his cracked and taped up iPhone. He says it’s a conversation starter at bars. He says all his friends are married having kids and has no one to hang with. Eddie says he’ll hang out with him. The cut is done and he heads out.

At the Villa, Belinda, LeAnn’s mom says she’s getting a facelift and LeAnn tells her it will hurt too much. She thinks her mom has gone too LA. Rendee shows her new boob job and the three young women talk about how they’ve all had boob jobs. Rendee says LeAnn should babysit so they can go out for a hot minute. LeAnn agrees to watch her for the day.

At the house, LeAnn plays with the baby when Eddie comes in and asks if she can handle it. He says he’s going for a beer with Mike. He says he can’t believe Chrissy let her do it and then says he’s joking. She reminds him they have two kids there half the time. He goes. She says Eddie forgets that when they met his youngest was two so she dealt with poopy diapers and temper tantrums.

He tells her to call if she needs anything. LeAnn gets a call from Darrell her producer. She says she’s babysitting. He says he needs her and there’s a huge project that’s an emergency. He asks to meet now. She says she has to bring the baby along. She says to give her 30 minutes. She rings off. She asks the baby if she’s been to a business meeting before.

LeAnn hauls her out to the car in her carrier and loads her in. She tries to figure out the carseat and seatbelt and calls Chrissy. She says she’s fine but needs help with the carseat because she has to meet Darrell. LeAnn flips the carseat to face backwards then tells her to find the buckle. LeAnn says she can’t get her hand in. She tells Chrissy she’ll figure it out. She gets her in and they go for a drive.

The baby is crying by now. She parks and walks the baby in with her. Darrell says hi to the baby. They coo and then ask for a high chair. The baby cries on and off. He introduces her to Steve. The baby is fussy and the meeting is awkward.

Steve tells LeAnn he needs a theme song but needs a sketch of it tonight. Darrell says he needs to do it then. LeAnn pulls the baby out to comfort her and she says she would like to do it. She says she can be in the studio tonight and could have it sent to him tomorrow because she doesn’t want to drop off the baby. Eddie meets up with Mike but isn’t happy to see two girls there. He invited them after he met them at the salon.

Eddie says if he thinks he’s going to be his wing man, it’s going to fail as bad as his first marriage. Eddie shows them photos of his wife and they ask if she sings at home a lot. The girls ask more stuff then go to the bathroom. When they go Eddie asks what the hell they’re doing. Eddie says as soon as anyone takes a photo it will be bad. Mike asks him to help him out and take one for the team.

Eddie says the only team he’s on is team happily married, not team get Eddie laid. The girls come back and he says he has to go. The girls say obviously he didn’t know they were coming and tell Mike that Eddie is a nice guy. LeAnn sings to the baby as she tucks her in. Eddie asks how it was and she says it was a lot more than she expected.

He asks if she still wants one and she says she does but they can wait a little longer. She tells him she has to go work on a track with Darrell and heads out to the studio. She and Darrel work on a new song. LeAnn says she’s been doing music since she was a fetus basically. She says if she could master real life like she has music her life would be so easier.

LeAnn says she loved having the baby but saw how much her life would have to change if she had a baby and says right now it’s not practical. LeAnn says the song is pretty good for a babysitting zombie.