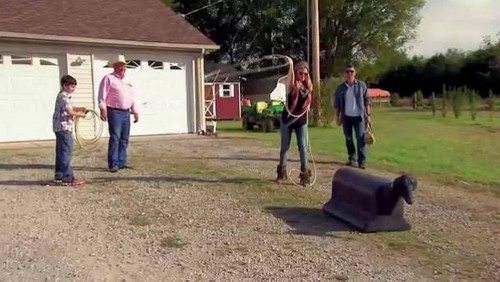 Tonight on VH1 LEANN & EDDIE airs with the sixth episode of it’s first season called, “Mama Drama.” On tonight’s episode, LeAnn grows concerned about her fertility levels and has them tested. Meanwhile, Eddie takes the puppies to dog therapy.

On the last episode LeAnn got baby fever after spending time with her childhood friend and her baby. LeAnn loved having the baby but saw how much her life would have to change if she had a baby and then realized that it was not practical. Meanwhile, Eddie inadvertently went on a double date with his friend. Did you watch the last episode? If you missed it we have a full and detailed recap, right here for you.

On tonight’s episode, Eddie is surprised by the results when he attends dog therapy with the puppies.

Would LeAnn Rimes be a good mother? Well, apparently she and Eddie Cibrian aren’t trying yet but she is concerned about fertility. As it turns out her mother struggled for 12 years to get pregnant with her and so she is now worried that maybe those issues are hereditary. LeAnn decides to see a fertility specialist to be tested for every issue imaginable to see what her chances of pregnancy actually are. She has an u/s, blood work and genetic testing done to find out exactly where things are at.

LeAnn’s dog Precious is acting depressed so Eddie gets suckered into dog therapy with a woman endorsed by Oprah. He ends up down on the floor with this woman and his three dogs trying to learn how to interact with the dogs better. Meanwhile LeAnn decides to go to a hip hop class with her friend Liz and they end up discussing babies, fertility and miscarriages. The latter is something that LeAnn had never thought about before now.

Eddie decides to try and cheer LeAnn up by taking her bowling. She needed to do something as simple as bowling to take her mind off of things. LeAnn is shown baking cookies the next day when her phone rings and it’s the fertility doctors’ office calling. She is told that her levels are low and that she should try to conceive soon. Eddie pretty clearly doesn’t seem to want to have a kid with her. He says that he does and tells her to stop the birth control but there is a lot of hesitation in his voice. Tune in next week for more of LeAnn and Eddie!