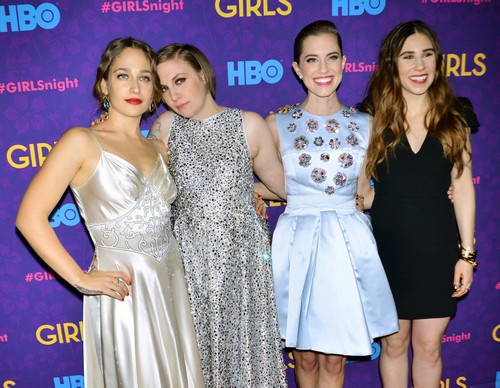 Along with the rest of Hollywood, Anna Wintour is apparently trying to make the cast of Girls happen, if they haven’t already. There were some rumors a while back that she was planning on putting Lena Dunham on the cover of Vogue, begging the question of why exactly Anna’s trying so hard to win these girls over.

Well, one could say that Girls has become a cultural phenomenon, and as the person in charge of Vogue, she could want to take advantage of that. Also, Vogue has been losing some of its glossiness and sheen over the past few years, and Anna might be trying to touch upon the cultural zeitgeist somewhat. What an interesting era, when even Anna Wintour has to bow down to the wishes of the Internet plebeians.

Anyway, a report from Page Six claims that Anna has personally involved herself with the Girls cast, and she helped all of them receive a high fashion make-over before the show’s third season premiere at the Lincoln center. All of the girls turned up looking very glamorous, much more so than they do at most premieres and events. And apparently, they have Anna to thank for that, who also turned up at the Season 3 premiere at the Lincoln center.

Either way, don’t be surprised to see Lena Dunham on the cover of Vogue Magazine within the next year. Even if Lena’s not exactly the type of person who would usually grace Vogue’s cover, we should appreciate the fact that even the stodgiest and stuck-in-their-ways magazines are trying to diversify.