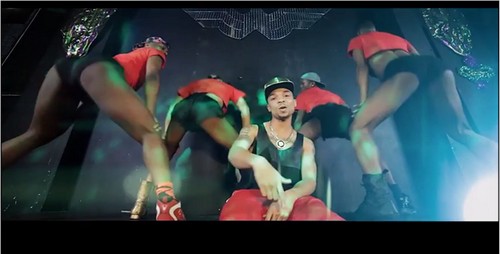 Lil Wayne has signed an openly gay rapper, Fly Young Red, to his Cash Money Records, changing the rap game for good. At least that was the story out there earlier today. If it were true it’s about time, too – there’s not many areas of the music industry that are still particular to ‘straight’ artists, but rap was definitely one of them.

Of course, Fly Young Red also had the success to go along with his moniker, commanding nearly 600,000 views on Youtube for his track, ‘Throw That Boy P***y’. In a twist, the music video showed male dancers wearing skimpy female clothing and dancing provocatively. Considering that music videos for rap songs almost always have women doing that, it’s certainly a refreshing change of pace for the genre.

Fly Young Red also explained his reasoning for doing the music video, explaining, “I decided to create the video because I would go to gay clubs and I would see a lot of gay guys dancing to hip-hop music that rappers were talking to females. Gay people who listen to hip hop, they shouldn’t have to change the word from girl to guy. They should have their own music, and I want to provide that outlet for them.”

Plus, Wayne insists that the game-changing nature of the music video and the number of times it’s been viewed are examples that the public has gotten over its homophobia concerning rap musicians, by and large. He told 24HourHipHop, “Gay, straight, black, white, blue or purple. Good music is just good music. Have you ever been in the club when that joint came on? Niggas go crazy when that drop. I had to make him YMCMB [Young Money Cash Money Billionaires].”

Slowly but surely, let’s hope that Lil Wayne’s signing Fly Young Red convinces other rappers to come out of the closet [cough, Kanye West, cough]. Seriously, all these singers who have been in the closet for ages know that there’ll be very little, if any, backlash to them coming out. And honestly, those ‘fans’ who do complain are not worth listening to.

UPDATE: There is news out there now contradicting the report that Lil Wayne has signed Fly Young Red to their label. YMCMB honcho Mack Maine was asked if there was any truth to the story that YMCMB signed the gay rapper and Mack said: “No not at all.” Oh well, just when we had a shred of hope that rap might be getting civilized….