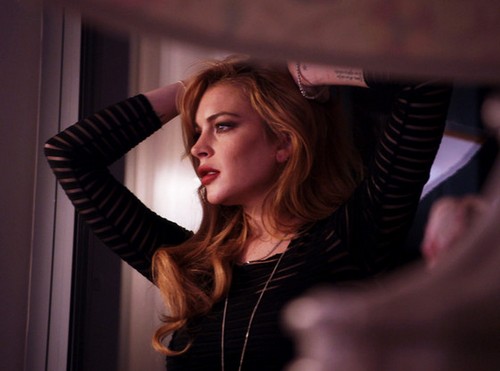 The premiere episode of Oprah Winfrey’s Lindsay episode starts with a flashback to Lindsay Lohan’s infamous Aug 3, 2013 interview with Oprah, which was filmed only 4 days after she had completed her 90-day court-ordered rehab time at Cliffside Malibu.

Back in their first interview, Oprah and Lindsay met at the interview area. Oprah says that before the interview starts, she asks if Lindsay wants out of it. Lindsay says she wants to be honest and be herself. Oprah says that’s her intention: to provide a path for that and she will call her out on any BS. Oprah says she is really interested in the truth about her struggles and path to recovery. Lindsay recognizes that she’s an addict and that her drug of choice is alcohol.

Oprah says she has heard she plans to go to Europe. She says she doesn’t believe that because it’s just days after rehab. Linday says her brother is going with her because she is doing a yoga meditation program.

Oprah says she doesn’t think it’s a good idea. She says she questions it because she thinks Europe is the playground for fun and pleasure and that she might fall in the mindset “why not do this?” Lindsay says she won’t be going to parties. Oprah says she is not her coach, but she wants her to think if that environment would be the best for her sobriety as opposed to staying in NYC where her family is. At the end of the episode, they mention that two days later after the interview, Lindsay canceled her planned trip to Europe.

Back in LA, 11 days out of rehab. Lindsay gets into a car and drives to get her stuff from storage. Amy Rice –who has been hired to direct the series — asked her how her days have been. She says the chaos of daily life doesn’t affect her anymore.

We see many boxes full of clothes. she’s moving everything she has accumulated over 9-10 years in LA to NY to her mom. We start seeing footage of fans, some of whom are optimistic while others have lost hope for her. Overall, they wish her the best. Throughout the fan footage, we see black background with messages referring to the multiple counts of her infamous DUI charges, theft charges, violation of probation, and reckless driving.

Lindsay says she knows this time is her last chance to come back. She says there’s nothing else in that party environment for her to do. So from here on now, she can only live on integrity.

We see Lindsay sorting though her boxes filled with clothing items and sort what will be going to NY.  Next week we get part 2. We are promised that future episodes will show Lohan trying to rebuild her stagnant career, battling Michael Lohan and dealing with Oprah who calls her out on bad behavior.