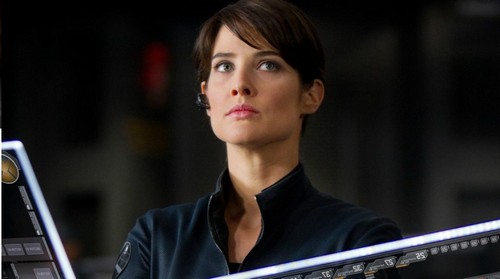 In a recent episode of her Oprah Winfrey reality show, Lindsay Lohan decided to spout some delusional comments about her career. More specifically, Lindsay seems to think that she was in the running for a part in the Avengers, but she wasn’t given the role because her agents didn’t push ‘hard enough’ for her. Oh, and she also claims that the role she was up for ended up going to an ‘unknown’.

Wow… there are simply no words. See, there were two significant speaking roles for women in the Avengers, not counting Gwyneth Paltrow‘s Pepper Potts: Scarlett Johansson’s Black Widow and Cobie Smulders‘ Maria Hill. Both Paltrow and Johansson had already been cast by the time the Avengers rolled around, and plus, they’re not exactly unknowns. So that leaves us Cobie Smulders.

Cobie Smulders has been starring in How I Met Your Mother for nine years, and Lohan’s calling her an unknown? Lindsay hasn’t starred in a movie in years while Cobie has been working steadily, and Lindsay has the nerve to call her an unknown? Plus, how on earth did she get the impression that she was being seriously considered for a role – ANY role – in the Avengers. Marvel takes risks [i.e. Robert Downey Jr.], but NOBODY is hiring the cracken right now. See, the difference between Lindsay and Robert is that he demonstrated the ability to be the best actor in the room – whereas Lindsay… well, let’s just say that the Marvel executives probably watched Liz & Dick before they ran screaming from the room, putting Lindsay’s name on the no casting list forever.