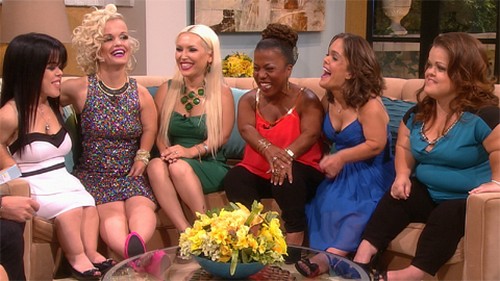 Tonight on Lifetime LITTLE WOMEN LA airs with a new episode called, “Who Do You Think You Are.” On tonight’s episode, Christy and Traci’s bridal battle intensifies as Christy steals Traci’s spotlight at her wine tasting party.

On the last episode Christy went shopping for her engagement ring even though Todd hadn’t popped the question. While the women prepared for their “pinup girl” themed photo shoot, Traci revealed that she was set with her wedding date, which aggravated Christy, and ignited a race to the altar. Terra and Elena temporarily mended their tense relationship when Elena revealed a heartbreaking story about growing up as a little person in Russia.  Did you watch last week’s episode?  If you missed it we have a full and detailed recap, right here for you.

On tonight’s episode, Christy and Traci’s bridal battle intensifies as Christy steals Traci’s spotlight at her wine tasting party. Elena visits the doctor to find out what type of dwarfism she has and determine potential problems that might arise during pregnancy. When Traci has the women help her pick the perfect wedding gown, their tastes clash and things heat up

Tonight’s episode is going to be a fun one, which you won’t want to miss. So be sure to tune in for our live coverage of Lifetime’s Little Women LA Season 1 Episode 3— tonight at 10PM EST!

Tonight’s episode begins with Christy and her mom getting their nails and toes done. They joke around and discuss how Christy should enter the party for Traci’s engagement. She tells her mom about how Traci has been acting towards her. Her mom encourages her to go to the party with her hands held high showing off that ring.

Meanwhile, Elena is having lunch with her hubby and opens up the conversation with some baby talk. She has babies on the mind and wants to get his feelings about it. They’ve talked about it before but now they are more serious and talk about some of the concerns. Elena shares the dangers a little person may face when pregnant. She also shares that she has the dwarfism gene and that there is a chance their child could be a little person as well. She has talked to the doctor already, but will need another visit before they begin trying.

Later, Tonya hosts a wine-tasting party for Traci in honor of her upcoming wedding. Traci arrives and all the ladies are now there but Christy. When she finally arrives, Terra and Traci are on the attack because Christy waved her ring finger. Not a big deal, but apparently it is to these two. The ladies begin to drink and have fun. Christy refrains from drinking as she is sober and has been for years. The talk gets dirty, of course, and Christy asks Traci whether or not she has explored Erik’s package. The ladies all chime in and Traci, the devout Christian, is clearly uncomfortable.

When the women begin to discuss rushing into relationships, Christy brings up how awesome it was that Elena and her husband were married after five months together. Terra then blurts out that it was likely because she needed to be married quickly for a green card. Christy calls her on her rude comment and Terra brings up something from left field. She tells Christy that what was really rude was the fact that she lied about being five years sober when she told her Todd gave her a beer and made her regret breaking her sobriety.

Christy claims she never said that and the conversation gets more heated than ever! Christy calls Terra a “stupid b*tch” and walks out. Terra says she can’t trust her because she lied. Elena comes after her and they have a nice talk. They go for a walk. Back at Tonya’s house, Traci is still complaining about Christy, but she is likely just feeling jealous as she has been that someone else is getting attention as well.

Elena told her that Terra was out of line and that seems like an accurate call. If Terra doesn’t like someone, they definitely feel the wrath. Christy went home and told Todd what happened and he listens as she is really upset. Terra goes home and tells Joe what she said. While he understands her side, he told her that she should not have gone there and needs to apologize. She agrees to apologize…making it genuine, however, is a whole different story.

Briana goes with Elena to the hospital as she attempts to get more details on the type of dwarfism she has. The doctor comes in and tells her that she can likely pinpoint exactly the type of dwarfism she has based on her medical history, measurements, and exam. The exam includes having her do certain things like touching her toes, raising her arms, and it is reminding her of when she was a child in Russia. She is told, after her x-ray, that she has to wait a few days before she’ll get the results. Elena says it will likely feel like an eternity.

Terra meets with Christy for lunch. Terra apologizes for being so rude. Christy asks terra if she’s ever seen her drink. While she says she has not, she still sticks to her story that Christy told her she drank with Todd. Terra calls Christy a pathological liar. Christy gets fed up and leaves their meeting. When Terra gets home after her bitter lunch, she finds Joe is packing to leave out of town. Terra is sad and asks for a date night as soon as he returns and he tells her “Let’s do it!” They end their declaration with a kiss.

The ladies, minus Christy, go dress shopping. Traci says how challenging it is because no one makes dresses for little people, so she has to imagine everything cut to size. The ladies pour the champagne and Traci begins trying on dresses. Traci’s favorite dress is not well-liked by the other ladies. They say it doesn’t have the wow factor. She goes back for another. The ladies all love the next dress. Traci loves it as well. Traci gets emotional as she sees herself in her dress and thinks of Erik and how he will feel when he sees her in it. The ladies all shed some tears and through even more tears, Traci asks Terra to be her maid of honor. Terra is very excited and says “YES” and ends the love fest with a big hug

Elena and Preston go back to the hospital to meet with the doctor about the findings. They are told that Elena has the type of dwarfism labeled Pseudoachondroplasia. She asks about what she and her husband are up against if they decide to have children. The doctor shares that she didn’t find anything that would prevent her from getting pregnant. The doctor also shared that there is a 50% chance she will pass the gene on to her offspring. Once they are alone, Elena tells Preston about how hard things were for her growing up. She says how hard it is to be different. She is worried about having a child that would have to go through the same. Preston is very supportive and tells her they must stay positive.

Later, the ladies are enjoying time by the pool and Elena shares what happened with the doctor and whether or not they are considering having children based on the results. Briana asks Terra and Christy how they are doing. They both keep it cool until Traci says that she didn’t hear and apologizes, and Terra says that she wants an apology for lying. The conversation gets heated again and Terra pushes Christy on the drinking issue again and Christy explodes. The ladies tell Christy not to leave after she gets up and that is where tonight’s episode ends.

Next week will likely heat up again as Terra can’t seem to let the drinking issue go and Christy won’t budge on making any admissions.